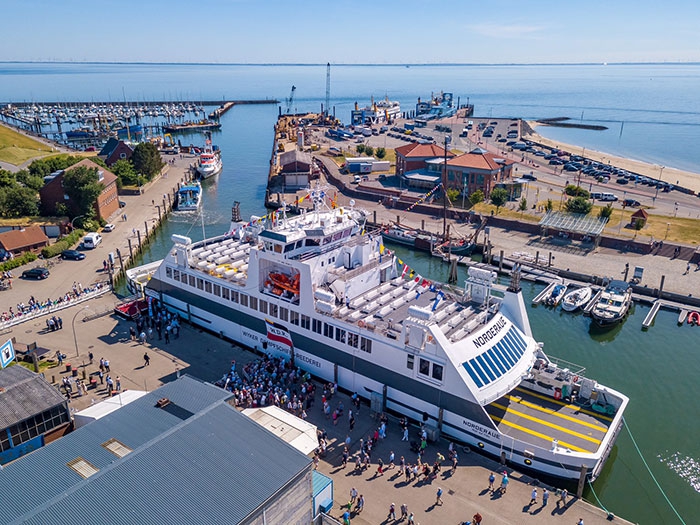 Heike Tholund, wife of the company’s Nautical Inspector / Fleet Operations Manager, Captain Christ Tholund, acted as godmother at the ceremony which was held in the inner port of Wyk on Föhr Island, where W.D.R. is headquartered.

The ship operates on Föhr-Amrum line connecting the island ports of Wyk (Föhr) and Wittdün (on Amrum Island) to the Schleswig-Holstein mainland. Delivered by the Neptun Werft GmbH shipyard in Rostock in April, the ferry has been operating on the line since the beginning of May.

To cope with growing cargo volumes, the car deck of the new ship was redesigned to accommodate trucks on four rather than just three parallel lanes, with the ship’s deadweight being increased accordingly.

“Due to the more advanced propulsion and larger capacity of Norderaue this ship consumes about 25% less marine gasoil per transported car than her predecessor, the 1992-built Rungholdt‘”, says W.D.R. managing director Axel Meynköhn. He adds that the new ship has been designed and constructed in accordance with the strict RAL-UZ 141 standards for Germany’s “Blauer Engel” eco label. Certification is presently underway, and W.D.R. also intends to have the vessel certified to the other Blauer Engel standard, RALUZ 110 focusing on sustainable ship operation.

The company’s 2011-built Schleswig-Holstein became the world’s first RoPax vessel to receive both certifications last autumn, and W.D.R. aims to repeat that achievement with its new ship.

“We have a highly modern, sustainable and efficient fleet on the Föhr-Amrum-Line now, which comprises three double ended RoPax ferries along with one conventional ferry, the Nord Friesland dating from 1995,” says Axel Meynköh.

Next year a passenger catamaran operating at speeds up to 16 knots is to complement the fleet. Carrying up to 250 passengers, it is presently under construction in the Netherlands.