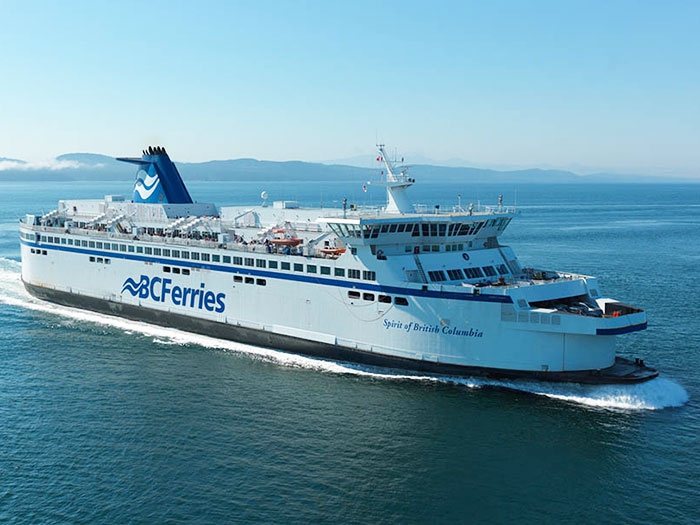 JUNE 11, 2018 — The Spirit of British Columbia, one of BC Ferries’ two largest vessels, has returned to service following the completion of a mid-life upgrade that included conversion to operation on natural gas.

The Spirit of British Columbia is the first of the two Spirit class vessels to undergo conversion. Its sister vessel, the Spirit of Vancouver Island, is expected to complete conversion during the spring of 2019.

The conversion to LNG as fuel was completed at the Remontowa Shipyard in Gdansk, Poland.

These vessels are the largest ships in the BC Ferries fleet. Built in 1993 and 1994, they each measure 167 m in length and can carry approximately 358 vehicles across two car decks and up to 2,100 passengers and crew with a service speed of 19.5 knots. The vessels are both ABS classed.

“The conversion of these vessels to operate on LNG is an important milestone for BC Ferries and the region, supporting more efficient and environmentally-friendly transportation,” says ABS Vice President for Global Gas Solutions, Patrick Janssens. “With the increased pressure for environmental compliance, LNG as fuel is a practical option for many marine owners and operators.”

“We are excited to welcome the Spirit of British Columbia back into our fleet and the environmental benefits and efficiency advantages that come with its conversion,” said BC Ferries Vice President of Strategy and Community Engagement, Mark Wilson. “We worked closely with ABS who helped us navigate the technical compliance challenges of converting existing vessels to run on LNG and played a key role in bringing this project to fruition.”

The Spirit of British Columbia is the first passenger vessel in the world to refuel LNG via delivery on a fully enclosed vehicle deck. The Salish Class vessels introduced last year were the first passenger vessels in the world to fuel LNG on an open vehicle deck via delivery truck. Both of these innovations were conceived by BC Ferries and designed, engineered and built by BC Ferries and its partners. Refueling on the vehicle decks, says BC Ferries, has saved more than $100 million in infrastructure costs that would have otherwise been required and have proven significant environmental benefits.

ONBOARD BUNKERING VIA TRUCK
The LNG is supplied by FortisBC. “Natural gas is the world’s cleanest burning fossil fuel and using LNG in deep-sea ships provides an opportunity to significantly lower greenhouse gas emissions and improve air quality on a global scale,” says Roger Dall’Antonia, President and CEO of FortisBC. “In collaboration with BC Ferries, we developed a first-in-the-world proprietary tanker truck technology to deliver fuel while onboard the vessel. Innovative solutions like this help make it easier for transportation customers to make the switch to LNG.” FortisBC has been performing onboard marine bunkering of LNG since December 2016. It supplies BC Ferries and Seaspan Ferries.

In addition, BC Ferries upgraded the vessel’s passenger areas with new carpeting, furniture upholstery, new table tops and refurbishment of all public washrooms.