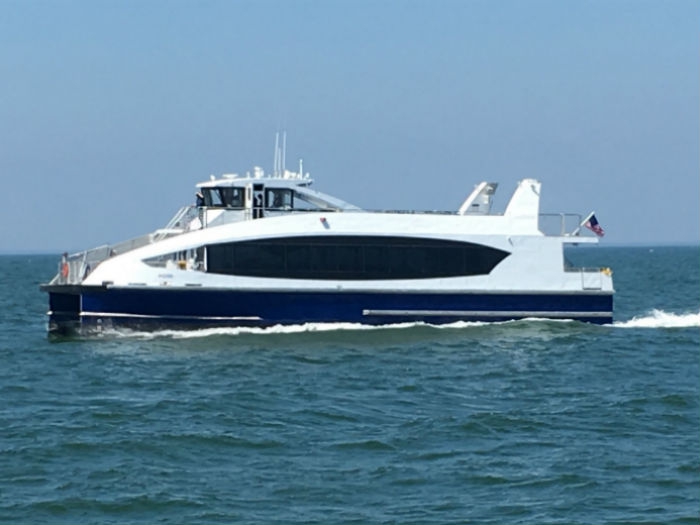 APRIL 4, 2017—The first of what will eventually be a fleet of 20 passenger-only ferries that will connect Manhattan with the other boroughs arrived in New York City on April 2.

The New York City Mayor’s Office tweeted out last night, “Ahoy! After a long trip and a harrowing experience with mud and alligators, the first @CitywideFerry has arrived in New York City!”

Citywide Ferry by Hornblower on April 3 tweeted out, “A 13-day journey later, H200 has made it to NYC!” along with a photo (below) of the ferry docked in the shadow of the city in Jersey City, NJ.

The all-aluminum catamaran ferries were designed by Incat Crowther. Horizon Shipbuilding and Metal Shark, Franklin, LA, were selected under separate contracts by Hornblower to build the fleet of boats, which will create one of the most extensive passenger-only ferry services in the U.S. when the service is fully operational in 2018. Six routes connecting Manhattan and Brooklyn, the Bronx, the Rockaways, and Queens is are estimated to provide a total of 4.6 million passenger trips annually. The nice thing for commuters is that a ferry ride will cost the same as a subway ride—$2.75.