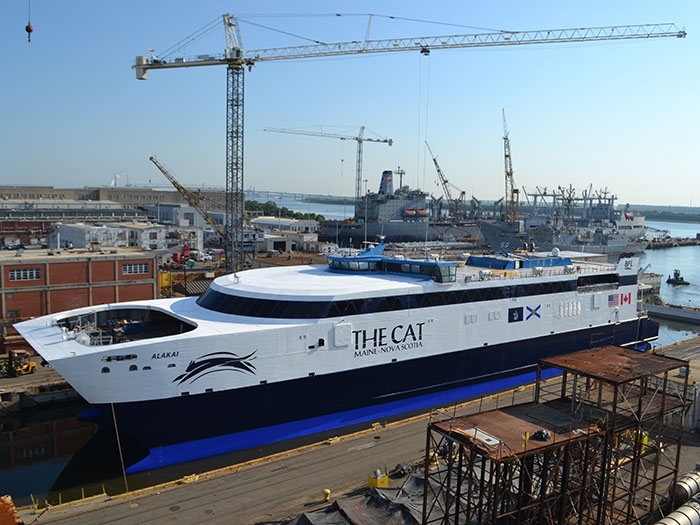 The CAT prior to float out from Detyens dry dock

JUNE 1, 2016 —  Bay Ferries Limited reports that The CAT high-speed ferry was refloated May 25 following an extensive period of refit, upgrade, and repair at Detyens Shipyards, Charleston, SC, that commenced in early April.

As we reported March 30, (see earlier story) the vessel is  the former Hawaii Superferry Alakai, one of two high speed catamarans delivered in 2007 by shipbuilder Austal USA and that operated in Hawaiian interisland service until March 2009.

After the demise of the Hawaii Superferry operation, the vessel eventually wound up in Navy ownership as the USNS Puerto Rico (HST-2). Bay Ferries Limited is chartering her from the the U.S. Navy’s Military Sealift Command.

She is set to enter ferry service, as The CAT, between Yarmouth, Nova Scotia and Portland, ME, on June 15.

The vessel has been undergoing extensive work at Detyens that is continuing. Following float out from the shipyard’s dry dock, final work includes completion of regulatory inspections and dock and sea trials before the vessel departs South Carolina for Yarmouth and Portland. The final schedule for the vessel’s northern voyage has not yet been set.

In need of TLC: The ferry prior to getting the Detyens treatment