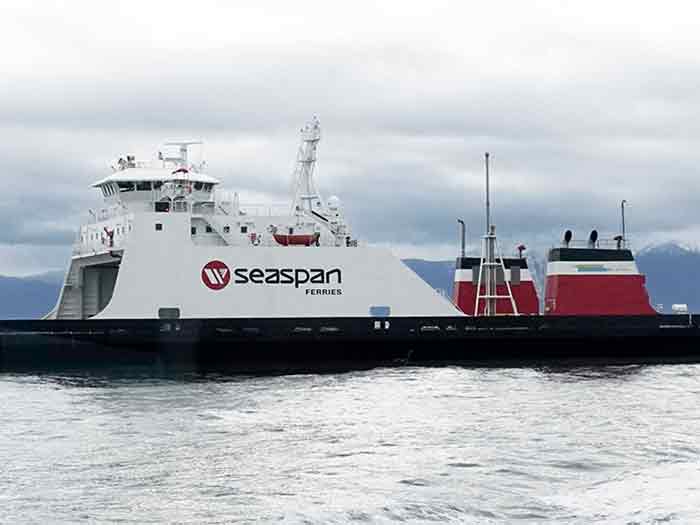 DECEMBER 9, 2016 — Seaspan Ferries Corporation (SFC) is reports that the Seaspan Swift, the first of two new dual-fueled/hybrid (diesel, LNG and battery) ferries, is currently docked at the SFC Tilbury Terminal in Delta, BC.

The ferry arrived home after an eight-week, 10,661 nautical mile journey following its construction at Sedef Shipyard in Istanbul, Turkey.

Earlier this week, with assistance from Vsrd, FortisBC and Redwise, the Seaspan Swift was successfully bunkered using a tanker truck to deliver LNG onboard the vessel.

The 148.9 m ferry, which can accommodate up to 59 trailers, will undergo a series of regulatory inspections and crew training programs throughout December before entering operation on January 2, 2017.

“Seaspan Ferries is thrilled to welcome the Seaspan Swift, a state-of-the-art, technologically advanced vessel to our fleet,” said Steve Roth, Vice President – Seaspan Ferries Corporation. “Today’s announcement not only demonstrates an unwavering commitment to our drop-trailer customers, it is a testament to how we live out our core value of care for the environment by ensuring the conservation of Canadian oceans and waterways. The Seaspan Swift will reduce our greenhouse gas emissions dramatically compared to other current alternatives while delivering the highest level of efficiency, performance and reliability.”

The Seaspan Swift, along with its sister ship the Seaspan Reliant, mark the first vessels added to SFC’s fleet since 2002.

The Seaspan Reliant, SFC’s second dual-fuelled/hybrid ferry, nearing completion and undergoing testing and trials in Turkey, is expected to arrive in Tilbury early 2017.

Seaspan Ferries Corporation currently operates a fleet of seven ferries out of five terminals in British Columbia, and supplies more than 50% of all cargo to Vancouver Island.