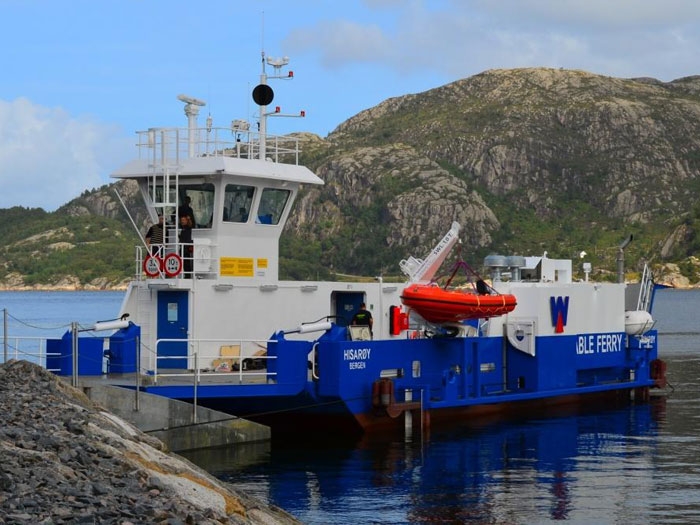 APRIL 3, 2014 — Mississauga, Ontario, headquartered Electrovaya Inc. (TSX:EFL) reports that a cable ferry powered by one of its battery systems has now been sailing between Mjånes and Hisarøy in Norway daily for six months, with “flawless operation” in Norwegain winter conditions.

The ferry, the KF Hisarøy is built to carry 49 passengers and six cars. Owned by Wergeland AS and operated by Gulen Skyssbåtservice, it makes about ten 1.6 km round-trips per day between the mainland and Hisarøy Island.

The cable ferry is driven by two winches on-board and Electrovaya’s on-board lithium ion battery system is recharged on the mainland between the round trips and over-night.

The 100 kWh prototype battery system is based on Electrovaya’s new generation SuperPolymer 2.0 technology.

The battery electric ferry is expected to save up to approximately 180,750 liters of fuel consumption over its expected lifetime. That has a potential to save about 500 tonnes of emissions; 480 tonnes of CO2, nine tonnes of particulate matter and volatile organic compounds, two tonnes of carbon monoxide and two tonnes of other type of emissions.

The lithium ion battery also eliminates all fuel exhaust including the usual carcinogens from diesel exhaust.

“Mapping of the potential for battery operation of ferries in Norway,” 47 of a total of 125 ferry connections are relevant for battery operation now, with 34 relevant for battery operation in the future. The Norwegian maritime market is expected to be a key driver of battery electrification. By avoiding the use of fossil fuels and instead relying on Norway´s hydroelectric power production, there will be a significant reduction of CO2 and NOX emissions into the atmosphere. In addition there will be no noise from the diesel engines and no carcinogens from diesel exhaust. Recent studies by the World Health Organization outlined the large quantity of carcinogenic gases produced by diesel exhausts and elimination of diesel exhaust is of major interest worldwide.

“Solund Verft, Electrovaya, Miljobil and its Norwegian partners are very well suited for additional maritime opportunities,” said Hans Wergeland, the owner of KF Hisarøy. “This market is expected to grow to substantially over the coming years, as the demand for environmentally friendly, zero carbon foot-print energy solutions increases. There is growing pressure from the International Maritime Organization and government agencies around the world to move away from fossil-fuel propulsion and hoteling energy solutions.”

“We are delighted to be working with Electrovaya and Miljobil Grenland.” says Svein-Tore Eide, General Manager of Solund Verft AS, the shipbuilding company responsible for the project. “This is the first battery electric cable and road ferry in Norway and there are also other ferry projects under discussion.” He says that Wergeland AS also currently operates a diesel driven cable ferry between Duesundøy and Masfjordnes and this ferry is targeted for conversion to electric in the near future.

“We selected Electrovaya due to its in-depth understanding of the energy storage system market, its high level of assistance during the design phase and its leading-edge technology.” Mr. Eide says “We are excited about the opportunity to partner with Electrovaya and Miljobil on future opportunities in Norway and elsewhere.”