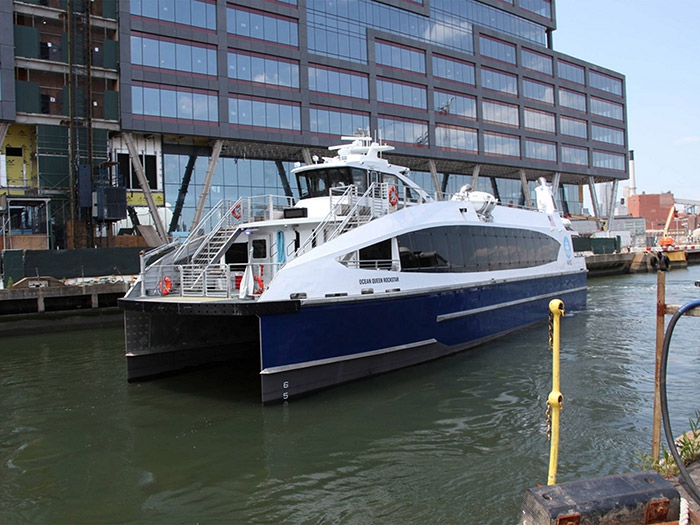 JULY 23, 2018 — Designer Incat Crowther says that its close interaction with the shipyards involved has helped NYC Ferry operated by Hornblower meet record breaking passenger demand for the commuter service, which launched in May 2017 and took just 86 days to notch up its millionth passenger.

The latest vessel to be delivered is Ocean Queen Rockstar, the first in a larger class of vessel for the service. Built by Metal Shark Boats, the 29m, 350 passenger vessel will be used for the operations’ New York City – Rockaway run, which involves rougher water than the Hudson River and East River routes.

“We are excited on the arrival of the newest and largest NYC Ferry vessel”, said Junior Volpe, Director of Special Projects. “The larger-capacity vessel will help cater for record-breaking ridership across the system, which has recently reached five million passengers since NYC Ferry service launched in May 2017.”

Incat Crowther says the rapid rollout of vessels has been aided by its 3D production engineering which allows for each vessel to be exactly duplicated with reduced production errors.

The development of this latest vessel followed a similar pattern to the earlier vessels, resulting in Ocean Queen Rockstar – the 18th vessel in the fleet – being in service just eight months after being ordered.

Ocean Queen Rockstar features increased length, beam and depth compared with the vessels, seating 162 passengers in the main deck cabin and 182 on the open upper deck. The vessel is fully ADA compliant and features a well-equipped concession stand, bicycle racks and bow loading with direct stair access to the upper deck.

Powered by a pair of Baudouin 12M26.3 P2 main engines rated at 1,340 hp each, the catamaran operates at 24 knots at modest MCR, and is capable of a top speed in excess of 30 knots.

In addition to the design of the new Rockaway class vessel, Incat Crowther has worked with NYC Ferry to increase the capacity of some of the first-generation boats.