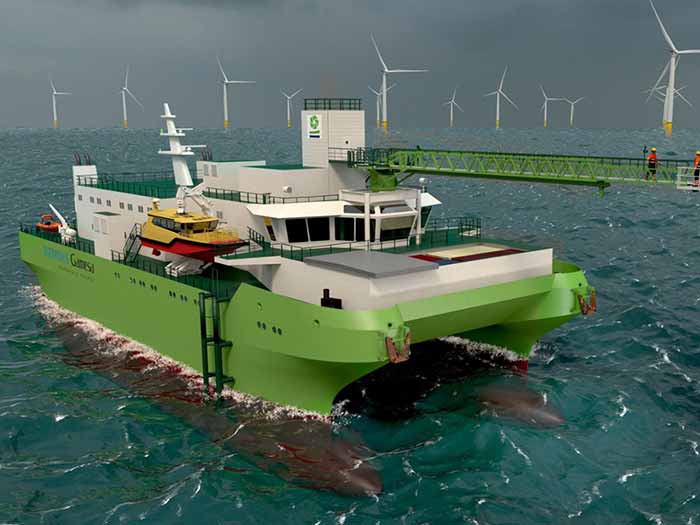 Set to enter service later this year, the 60-meter Groene Wind is the first Service Operation Vessel ordered by the DEME Group. The Small Waterplane Area Twin Hull (SWATH) vessel will be the first DP2 (Dynamic Positioning), twin-hulled SOV in the world, and will be the first to serve three different wind farm sites.

On delivery from Turkey’s CEMRE shipyard, it will be directly chartered to Siemens Gamesa Renewable Energy for the maintenance of the Rentel and Mermaid & Seastar (known as SeaMade) offshore wind farms in Belgium.

The SWATH design ensures low wave impact on movements when approaching wind turbines. Groene Wind will enable safe crew transfers in significant wave heights. Its DP2 technology means that the vessel can hold its position in rough seas but at the same time operate with lower fuel consumption. An impressive fuel consumption reduction of up to 50% can be achieved, further reducing the cost of wind farm maintenance.

Portsmouth, U.K.-based Cape Horn Engineering, which worked with Naiad Dynamics, ship motion control experts, on the CFD design optimization for the vessel’s stabilization fins, notes that the twin-hull ship is designed to minimize the hull cross section area at the sea’s surface.

The greatest benefit of this is that the waves have much less of an effect on the vessel, so it does not react as much to a heavy sea state. This improved seakeeping characteristics of the SWATH concept means there is a much more stable platform compared to a traditional monohull SOV, useful when approaching wind turbines and for safe crew transfers in waves.

Cape Horn says that the bulk of the displacement is located beneath the waves, where it is less affected by wave action. The design of SWATH is considerably more complex due to the structural complexities inherent to the design. With high surface drag, yet low wave drag, the SWATH is less susceptible to wave motion, but more sensitive to payload, which affects the pitch and the draft.

The vessels second generation DP2 technology means that it can hold its position in rough seas but at the same time operate with lower fuel consumption when compared to traditional SOVs. An impressive fuel consumption reduction of up to 50% can be achieved compared to a monohull SOV, further reducing the cost of wind farm maintenance. In line with her green credentials, environmental considerations are integral to the vessel design and include a waste heat recovery system and a Clean Design notation.

The SOV will be equipped with a motion-compensated gangway and daughter craft to safely transfer technicians to the wind turbines. It is also designed according to the latest comfort standards, allowing the vessel to be a comfortable offshore base for up to 24 technicians and a nautical crew.