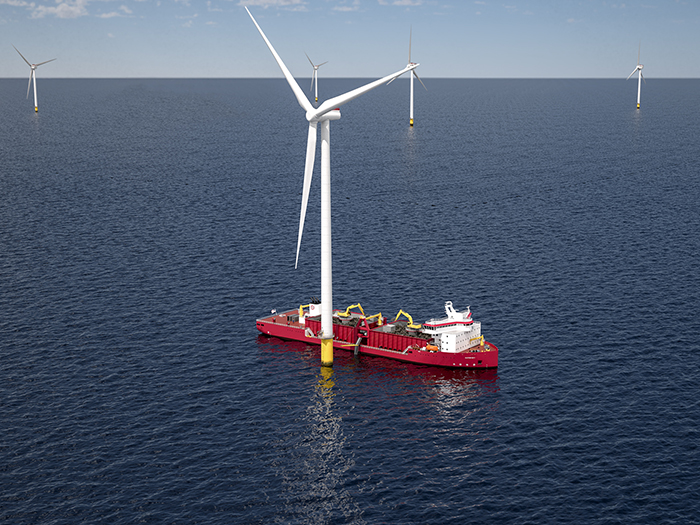 The vessel will primarily serve the growing needs of the U.S. offshore wind industry, installing protective layers of rock at offshore wind turbine foundations by means of an inclined fall pipe system.

Ulstein Design & Solutions BV has released a few more details about the subsea rock installation vessel that it is designing for Great Lakes Dredge and Dock (see earlier story). It will be the the first U.S.-flagged, Jones Act compliant, inclined fallpipe vessel and is considered to be critical in building the future of the U.S. offshore wind industry, including establishing a U.S.-based rock supply chain network.

“We are extremely proud that GLDD has entrusted us to develop their new asset,” says Edwin van Leeuwen, managing director at Netherlands-based Ulstein Design & Solutions. “We much enjoyed the cooperation with the GLDD team in developing the concept over the last couple of months, even though we never met physically due to the COVID-19 travel restrictions. Our team is eager to continue the further development of the vessel with GLDD.”

“At the start of the design we applied our newly developed ‘Blended Design’ method, enabling GLDD to co-evolve their business case with the ship concept,” says Ko Stroo, Ulstein’s lead naval architect and project manager. “This resulted in significant gains in economic performance, at the same time reducing fuel consumption and emissions, by optimizing vessel main dimensions, speed and dynamic positioning capability.”

“Our design for this U.S. Coast Guard compliant vessel is strongly focused on Jones Act compliant shipbuilding in the U.S.A. and ease of construction,” he adds.

The basic design will be developed by Ulstein’s Dutch design office, with strong engineering contributions coming from its sister offices in Norway and Poland.