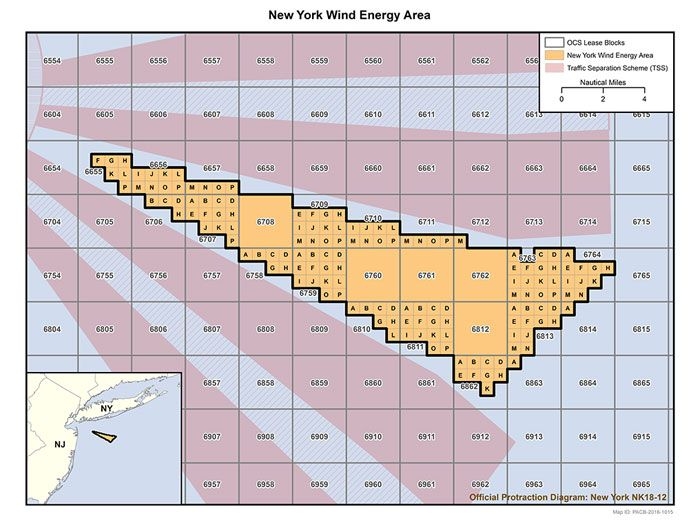 A “Proposed Sale Notice (PSN) for Commercial Leasing for Wind Power on the Outer Continental Shelf Offshore New York” will be published in the Federal Register on June 6, 2016, and will include a 60-day public comment period.

The end of the PSN comment period also serves as the deadline for any companies wishing to participate in the lease sale to submit their qualification package, if they have not already done so.

To be eligible to participate in the lease sale, each bidder must have been notified by BOEM that it is legally, technically and financially qualified by the time the Final Sale Notice is published. To date, seven companies have qualified to BOEM will host a public seminar in late June or July in New York City to describe the auction format, explain the auction rules and demonstrate the auction process through meaningful examples. It will be followed by a public meeting on BOEM’s planning and leasing efforts regarding New York offshore wind energy activities.

The time, venue, and related materials for the seminar and public meeting will be posted online at www.boem.gov/New-York.In addition to the PSN, BOEM will publish an Environmental Assessment (EA) on the same day for a 30-day public comment period.

“This is a great day for New York and our country as we continue to diversify our nation’s energy portfolio,” BOEM Director Abigail Ross Hopper said. “The proposed lease area could make substantial contributions to the region’s energy supply and assist local and state governments – including New York City – in achieving their renewable energy goals. In the meantime, we will continue to work with New York Renewable Energy Task Force, local communities and key stakeholders to reduce conflicts and bring clarity to potential wind energy developers.