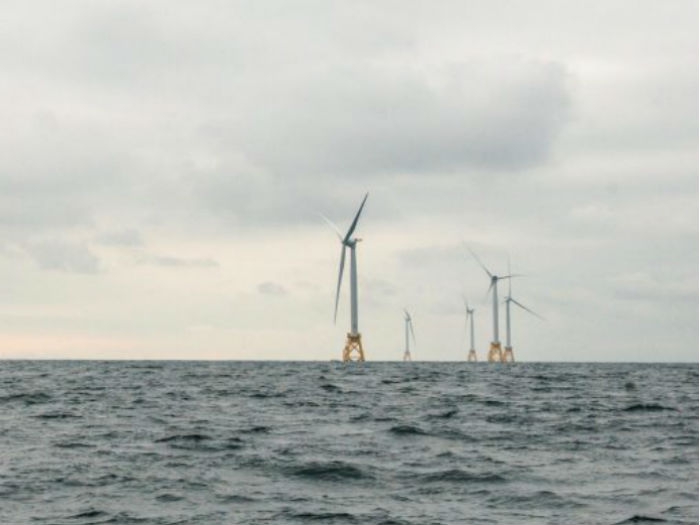 The Block Island Offshore Wind Farm is the only commercial offshore wind farm currently operating in the U.S.

MAY 12, 2017—Offshore wind on the U.S. East Coast got a big boost yesterday when the Maryland Public Service Commission (MPSC) awarded offshore wind renewable energy credits (ORECs) to two projects to be built off the coast of Maryland.

The MPSC says the decision will enable U.S. Wind, Inc. and Skipjack Offshore Energy, LLC to construct 368 megawatts of capacity, together yielding over $1.8 billion of in-state spending, spurring the creation of almost 9,700 new direct and indirect jobs and contributing $74 million in state tax revenues over 20 years.

As proposed, the U.S. Wind offshore wind farm would cost about $1.375 billion to develop with 62 turbines about 12 to 15 miles off the Maryland coast. It would begin operation in January 2020. U.S. Wind, headquartered in Boston, is a subsdiary of Italy’s Toto Holding.

The Skipjack offshore wind farm, which is being developed by Deepwater Wind, would be more modest with 15 turbines about 17 to 21 miles off the coast. It would cost about $720 million to develop and would open in November 2022. Deepwater Wind is the developer of the Block Island Wind Farm off of Rhode Island, the only commercial offshore wind farm in the U.S.

MPSC Chairman W. Kevin Hughes, said, “We have taken great care to ensure that this decision maximizes economic and environmental benefits to the state while minimizing costs to Maryland ratepayers.” Each company is awarded ORECs at a levelized price of $131.93 per megawatt-hour (MWh) for a term of 20 years, beginning in January 2021 for U.S. Wind and 2023 for Skipjack.

According to MPSC’s independent consultant, Levitan & Associates, Inc., the net ratepayer bill impacts associated with the commission’s approval are estimated at less than $1.40 per month for residential customers and less than a 1.4 percent impact on the annual bills of commercial and industrial (C&I) customers – both less than the ratepayer impacts authorized by the enabling legislation, the Maryland Offshore Wind Energy Act of 2013.

The projects had to meet a number of conditions to gain approval, including requirements that the developers create a minimum of 4,977 direct jobs during the development, construction and operating phases of the projects; pass 80 percent of any construction costs savings to ratepayers; and contribute $6 million each to the Maryland Offshore Wind Business Development Fund. The companies will be required to use port facilities in the greater Baltimore region and Ocean City for construction and operations and maintenance activities. The developers must invest collectively at least $76 million in a steel fabrication plant in Maryland and together fund at least $39.6 million to support port upgrades at the Tradepoint Atlantic (formerly Sparrows Point) shipyard in Baltimore County.