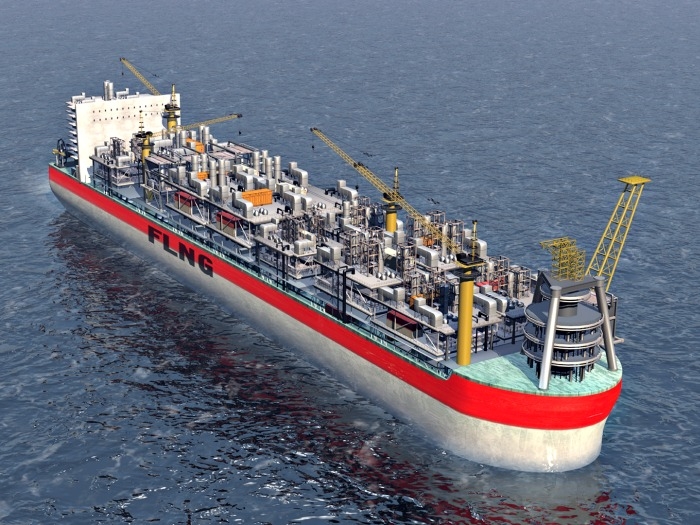 MAY 19, 2015—By the end of this year, the world’s first Floating Liquefied Natural Gas (FLNG) vessel will go to work in Malaysia’s gas field, some 180 kilometers off of the coast of Sarawak, producing 1.2 million tonnes of LNG annually.

Classed by DNV GL, the PFLNG1 vessel, also known as PFLNG SATU, is expected to play a significant role in the efforts of Malaysia state owned oil company PETRONAS to unlock the gas reserves in that country’s remote and stranded fields previously thought to be uneconomical to develop.

The 365-meter-long PFLNG SATU is expected to change the landscape of the LNG business where the liquefaction, production, storage and offloading processes of LNG—previously only performed at onshore plants—will now be able to be carried out hundreds of kilometers away from land and closer to the offshore gas fields. The facility can also be the solution for early monetization and more agile LNG production.

The push to produce gas in remote areas has driven innovation. DNV GL says FLNG technology is developing rapidly as part of the industry’s quest for resources in more remote waters. A number of concepts have been discussed, but PFLNG SATU is one of only a few are currently under construction.

The largest FLNG facility is Shell’s Prelude, which measures 488-meters long by 74 meters wide—the largest hull ever built. Lloyd’s Register has been actively involved in the project through classification, certification of equipment, and validation against performance standards. Shell is developing FLNG facility for the Prelude gas field, 200 kilometers off Australia’s northwest coast. At about 1,600 feet long, the Prelude FLNG vessel is longer than the Petronas Towers in Kuwala Lumpur are high.

Last year, class society ABS granted approval in principle (AIP) for the Sevan cylindrical FLNG production unit concept for offshore production, storage and transfer of LNG, LPG and condensate. The FLNG design concept is based on the proven circular and geostationary Sevan FPSO design, which is being used in the Norwegian and Central U.K. North Sea and offshore Brazil and is under construction as the first application of an FPSO unit to be installed in the Barents Sea.

ABS is classing Petronas’ second FLNG facility, which is expected to start producing gas in early 2018.

For its part, DNV GL has developed a new unmanned floating LNG concept that it says overcomes many of the challenges currently faced by those looking to unlock the potential of remote offshore gas fields.

Developed under its Extraordinary Innovation Program, DNV GL says the concept called Solitude incorporates many available technological advances into a solution that offers some 20 percent reduction in annual OPEX, only adding a few percent increase in CAPEX and at the same time increase the overall safety.

“Solitude has been developed with maintainability foremost in mind,” says Elisabeth Tørstad, DNV GL CEO Oil & Gas.  “By changing the focus from maximum efficiency to maximum reliability, and selecting robust processing options with built-in redundancy, we were able to develop a solution that ensures production levels and boosts the economic viability of FLNG projects.”

Equipment on the Solitude will be monitored from shore with much of the routine maintenance and fault correction carried out by robots. The topside has a system of rails that run along each process train, providing these robots with access to all the equipment.

As there will be no one living on board or working on the topside during normal operation, the associated personal safety risks are eliminated. When people do enter for large maintenance campaigns, the topside would be prepared for a safe working environment. A new support and accommodation vessel concept and its associated docking system on the FLNG further boost the safety of interventions.

“While Solitude is a holistic concept, many of its solutions can be implemented independently – and some are already available today. These projects are our way of thinking out loud. Our aim is to present high-level concepts that can form a basis for discussion and be further developed in collaboration with the industry. We see Solitude as a new opportunity for the future,” adds Tørstad.