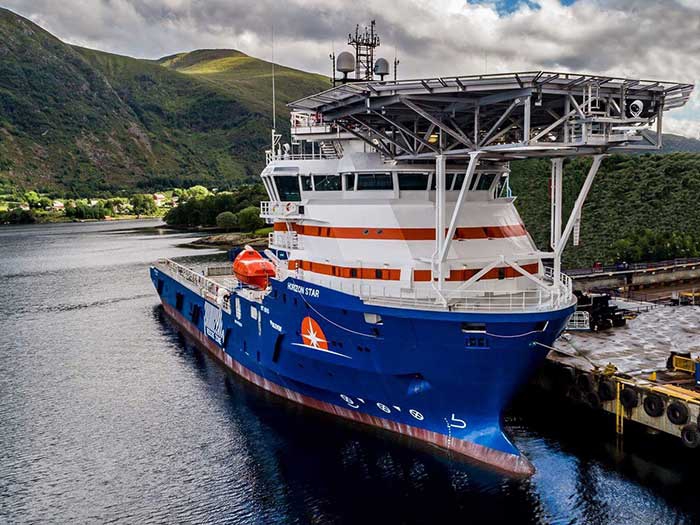 AUGUST 14, 2017 — Mystery solved: Canada’s Horizon Maritime Services has emerged as the buyer of the Marin Teknikk MT 6015 design offshore multipurpose vessel whose sale was recently announced by Norwegian shipbuilder Kleven (see earlier story). The vessel (Kleven yard number 379) was originally ordered by a Malaysian owner who was unable to come up with the financing.

Now, after being christened Atlantic Star in Norway, the subsea intervention and offshore field support vessel has arrived in Newfoundland & Labrador where she is to start work immediately in the waters east of the province.

Horizon Maritime Vice President of Business Development, Graham Curren, said the company bought the vessel to provide more flexibility and capacity than is available in the Canadian offshore.

The Horizon Star is simply “the most versatile, capable, modern vessel in the market,” he said.

The capabilities and capacity of the Horizon Star are impressive. It is equipped with a helicopter pad, a crane with capacity to reach 3,000-m depths and handle massive equipment, and has a moon pool that permits the launch of subsea equipment from beneath the vessel, avoiding the tumultuous ocean surface.

Formed in 2015, Horizon Maritime has  previously crewed and operated vessels for other owners. The acquisition of the Horizon Star  marks the next stagein the company growth and expansion plan.