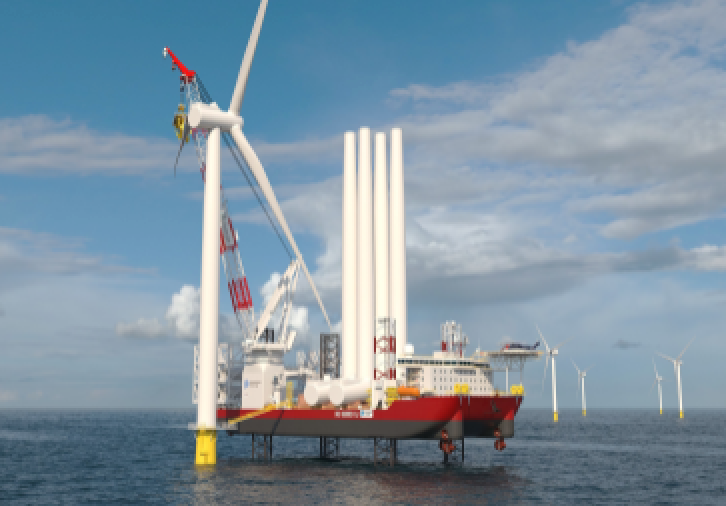 At one time, offshore service vessels were the bread and butter work of many U.S. Gulf Coast shipbuilders. Those days are long gone and, with them, a few shipyards. The big hope for a revival of offshore vessel construction, of course, lies in offshore wind.

Right now, we are beginning to see the first few orders for vessels to support that sector. Already a handful of crew transfer vessels (CTVs) have been delivered. These are the pick-up trucks of the offshore wind market and we can expect orders to ramp up in line with the rollout of the offshore wind industry. What has to be remembered is that currently most projects still early in the permitting phase.

Two broad categories of vessel will be needed, installation phase vessels and service vessels required once a wind farm is up and running.

The Jones Act prohibits foreign-flag WTIVs from transporting wind turbine components out to a wind farm site on the U.S. Continental Shelf. If you want to install turbines using a WTIV working in the way it was designed to work, the Jones Act requires that it be U.S. built, owned, flagged and crewed. Right now, only one such vessel is under construction, Dominion Energy’s Charybdis, currently taking shape at the Keppel AmFELS shipyard in Brownsville, Texas.

The vessel’s hull has a length of 472 feet, a width of 184 feet and a depth of 38 feet, making it one of the biggest vessels of its kind in the world. It has accommodations for up to 119 people. With a 2,200-ton lift capacity Huisman leg encircling crane, it is designed to handle current turbine technologies as well as next generation turbine sizes of 12 megawatt or larger. It will also be capable of installing the foundations for turbines, something not all WTIVs can do.

Dominion Energy expects the vessel to operate continuously for several years through contracts with offshore wind projects in the U.S. And, in June, Ørsted and Eversource reached an agreement to charter it for the construction of two offshore wind farms in the northeast.

Charybdis is expected to be sea ready by late 2023, and will first be deployed out of New London, Conn., harbor to support the construction of Revolution Wind and Sunrise Wind, both under joint development by Ørsted and Eversource. The charter’s terms will allow the vessel, subject to state regulatory approval, to support construction of the Coastal Virginia Offshore Wind project, which is expected to be completed in 2026.

A White House fact sheet released in March envisaged “the construction of four to six specialized turbine installation vessels in U.S. shipyards, each representing an investment between $250 and $500 million.”

So, where are the orders?

That $250 million number looks to be wishful thinking. The realistic figure is the upper one and that price tag of around a half-billion dollars is substantially above Asian shipyard prices. Eneti Inc. earlier this year entered into a binding agreement for the construction of a WTIV at Daewoo Shipbuilding and Marine Engineering in South Korea. Like the Dominion energy vessel, it is being built to a Gusto MSC design, though it has a higher capacity (2,600-ton) Huisman crane. The big difference is the sticker price: $330 million. That seems to be in the ballpark international price range for big WTIVs, with Copenhagen, Denmark-based Cadeler reporting, at the end of June, that it had signed a contract with a Chinese yard for two large X-class WTIVs at $325 million each.

Formerly known as Scorpio Bulkers, Eneti’s chairman, Emanuele Lauro, sees the energy transition as offering a brighter long-term future than the traditional bulk trades. He is bullish about the opportunities presented by U.S. offshore wind and, despite the price tag, has been in discussions with U.S. shipyards on building a Jones Act WTIV.

Meantime, there are Jones Act-compliant work arounds that allow the use of a foreign flag WTIV and Vineyard Wind has contracted with a U.S. subsidiary of Belgium’s DEME group its contractor for the offshore transport and installation of the wind turbines at the Vineyard Wind 1 site.

Deme Offshore US LLC is teaming up with Foss Maritime to provide Jones Act-compliant feeder vessels to transport the wind turbines from the port of New Bedford, Mass., to a foreign-flag DEME Group WTIV.

“Beginning in 1889, we have provided our fleet of highly capable tugs, deck cargo barges, marine engineering staff, experienced project managers and highly trained mariners to work on complex marine projects in harsh environments,” said Will Roberts, president of Foss Maritime. “We appreciate the opportunity to work closely with DEME Offshore US LLC in support of the Vineyard Wind project.”

As the build out of offshore wind ramps up worldwide, so will global demand for high-end installation vessels able to handle the new generation of giant turbines. Other U.S. developers looking to charter them in for the sort of feedering based solution selected by Vineyard Wind could find themselves in a bidding war, that could well push charter rates to the levels justifying WTIV construction at U.S. shipyard prices.