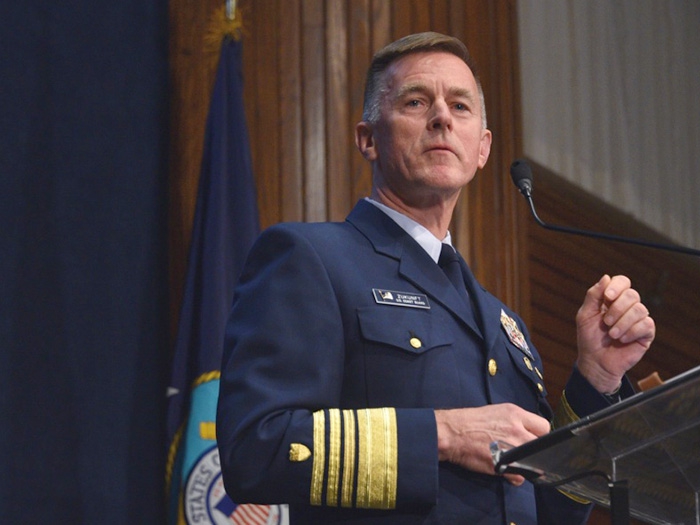 This was Zukunft’s final State of the Coast Guard Address, as he will retire June 1, following the Commandant’s Change of Command.

The commandant highlighted achievements of the Coast Guard’s workforce during the 2017 hurricane season, one of the nation’s most catastrophic on record. During three back-to-back storms, the men and women of the Coast Guard saved nearly 12,000 Americans. Among those impacted by the hurricanes, he said, were 700 Coast Guard families who lost their homes in the storms.

Zukunft also called attention to the Coast Guard’s work protecting the homeland, describing the service’s work in interdicting $7.2 billion worth of cocaine on the seas before it could reach the shores of the U.S. He also mentioned the Coast Guard referred 606 smugglers to the U.S. Department of Justice in the last fiscal year.

“We are also paying attention to our northernmost border. Our 4th Coast,” said the Commandant. “As an Arctic nation, leadership in this most arduous and largely unexplored domain has, for the most part, defaulted to the United States Coast Guard.

“We are trusted in the Arctic to preserve our sovereignty over precious oil and minerals, to ensure access to opening shipping routes, and, let’s not forget, to keep our border secure in a region with an emerging U.S. coastline and a mounting Russian footprint.

“In fact, the Coast Guard provides, and is the single point of failure, for assured surface access – and the preservation of our national interests – in both the Arctic and Antarctic. But our Coast Guard men and women need the right tools to accomplish this mission… it will take the recapitalization of our Polar Icebreakers.

“That is why I am pleased to announce that, very soon we will release a request for proposal, with the support of both the Administration and Congress, to acquire the first heavy icebreaker! The first installment that will recapitalize our Nation’s fleet of icebreakers.”

The Commandant also noted that the service now has a Cyber Security Program of Record, has constituted cyber protection teams on budget, and, in 2019, will launch a cyber major at the Coast Guard Academy in New London, Connecticut.

The commandant also announced the Sexual Assault Prevention and Recovery Strategic Plan will include a specific focus on victim recovery, saying that while he requires every senior member of the service to emulate a culture of respect, “every single one of us shares this quintessential responsibility.”