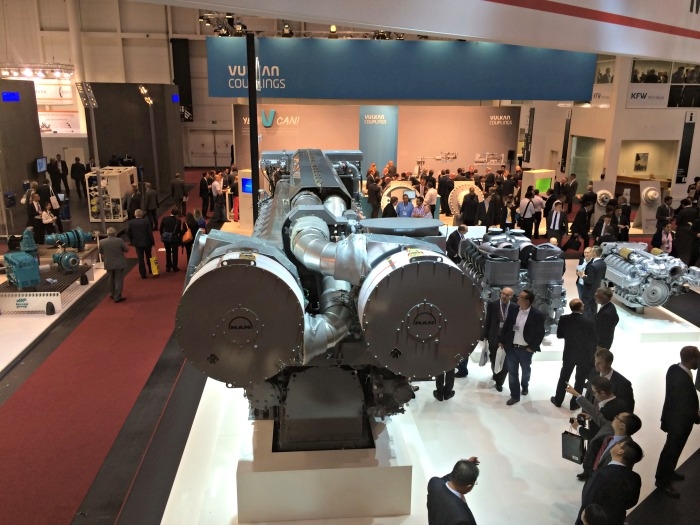 SEPTEMBER 14, 2014—Every two years, the shipping and shipbuilding world descends on Hamburg, Germany, for SMM, a week-long, mind-boggling smorgasbord of marine technology and innovation on display at more than 2,100 booths crammed into—and around—a series of cavernous exhibit halls at the Hamburg Messe trade fair grounds. SMM is arguably the leading international trade fair for the maritime industry. This year, roughly 50,000 visitors from around the world flooded into the exhibit halls that featured 90,000 square meters of exhibition space, drawing 2,141 exhibitors from 67 countries.

“We set new records this year,” says Bernd Aufderheide, CEO and President of Hamburg Messe und Congress GmbH. “This fair generates ideas and fresh impetus for the maritime industry, and it is a perfect platform for networking, inspiring each other and negotiating deals. It sends a positive, encouraging signal to the maritime community,” says Aufderheide. The industry’s top event again took place under the patronage of the German Chancellor, Dr. Angela Merkel.

The Asian maritime market was well represented. For example, South Korea’s Hyundai Heavy Industries (HHI), Hyundai Mipo Dockyard, Hyundai Samha Heavy Industries, Daewoo Shipbuilding, Hanju Heavy Industries & Construct Co. and Korea Offshore & Shipbuilding Association (Koshipa) staffed a joint booth displaying the country’s far-ranging shipbuilding capabilities. “For us as Asian shipbuilders, SMM is an event we cannot miss. This is where we meet up with our European customers, build relationships and generate new business,” says Hyoung-Won Hahm, Deputy General Manager of HHI. The venue itself has a strong appeal to him: “Hamburg is one of the most important ports for international container shipping. For our business this is a true hot spot,” he points out.

China was likewise represented by numerous well-known companies, such as the China State Shipbuilding Corporation (CSSC), one of the industry leaders.

The booth of Italian shipbuilder Fincantieri attracted plenty of attention with its generously sized displays of fascinating ship models to a scale of 1:150, including models of a FREMM class frigate, the cruise ship Carnival Sunshine of Carnival Cruise Lines, and the 133 meter yacht Serene.

On display at SMM was Germany’s leading position in the shipping industry. “German shipowners and operators are a key target group of this fair. With billions invested in state-of-the-art technology for both newbuilds and ships in service, they have made Germany the world’s third largest shipping nation. This benefits German suppliers and developers in particular,” says Ralf Nagel, Managing President of the German shipowners’ association, VDR.

German ingenuity was palpable in all of the exhibition halls. In keeping with the motto “Networked thinking, networked actions”, the German Engineering Federation VDMA presented a new version of “German Marine Equipment,” an Online manufacturer catalogue of all German companies of the supply segment. “It is our goal to bring the cumulative competence of German companies closer to international customers,” says Dr. Jörg Mutschler, Managing Director of VDMA. His opinion about the importance of SMM: “The focused yet familiar atmosphere among the exhibitors and customers and the high quality of the exhibitors are trademarks of the Hamburg fair. The reason for this is the fact that this fair has grown steadily over the years. This is why SMM is always going to be the leading international trade fair of the maritime industry.”

“SMM 2014 set new participation records, with a host of innovative products demonstrating the high level of the technological development work done by this industry,” says Dr. Reinhard Lüken, General Managing Director of the German Shipbuilding and Ocean Industries Association (VSM). In particular, Lüken says the exhibits of German shipbuilding and maritime technology companies are indicative of the exceptional competence of Germany’s maritime industry.

The global concern Siemens is a good example: “Among our highlights this year is our propulsion pod “eSiPod” which we are presenting with a new design and improved hydrodynamic properties plus a significantly expanded power range. This development is part of our strategy to increase the energy efficiency and reduce the emissions of ships sustainability through innovation,” says Andreas Schwann, Head of Siemens Marine & Shipbuilding.

Ralf Sempf, Director – Materials Management for German shipbuilder Meyer Werft, applauds the open-mindedness of the fair visitors. “With its excellent visitor figures and the decidedly positive, optimistic mindset I observed among exhibitors and visitors alike, this year’s SMM was a full success for me. I am taking home from this fair a wealth of extremely innovative ideas and concepts for our very special segment of the shipbuilding market: highly complex cruise ships.”

Green on the agenda

The protection of the marine environment and the improvement of ship efficiency were among the top items on the SMM agenda. “The shipping industry, working closely together with shipbuilders and suppliers, continues to devote considerable resources and capital to the development and implementation of a wide range of new technologies that protect air and water quality and increase energy efficiency. SMM again gave tangible evidence of the range of modern technology,” says MAN Diesel & Turbo CEO Dr. Stephan Timmermann. In his view too, SMM 2014 was a full success: “In the light of continued economic and structural challenges, the industry has shown it believes in its future economic success and its sustainability. There is a sense of anticipation, driven by long-term business partnerships which are so typical of the marine industry. MAN Diesel & Turbo has supported this spirit through its motto “The Power of Shipping,” which expresses our unwavering commitment to the maritime sector. The feedback from our customers was tremendously positive, and it expressed appreciation for the work and investment effort that has enabled the new products and technologies displayed at the fair,” says Timmermann.

Other marine diesel suppliers echoed Dr. Timmermann’s sentiments. “This fair is an international meeting place, and we are very happy with the attendance.

As for Rolls Royce Marine, the introduction of our new marine diesel engine B33:45 was a major highlight at SMM because now, all of them are represented here,” says Andrew Rice, Vice President Marketing, Rolls Royce Marine.

Other innovation on display included Raytheon Anschütz, a leading manufacturer of navigation systems, which announced it will supply a new generation of its integrated navigation system (INS) “Synapsis” for two new chemical and product tankers. The 50,000 dwt tankers are being built at the Croatian shipyard “3 May” for Spanish shipowner Marflet Marine. Furthermore, the company showcased its newly developed NautoScan NX radar sensors, the core element of the new Synapsis generation.

“Real-time digital processing of the radar signals and the innovative way the signals are generated enhance the security of crews, passengers, the environment and coast lines,” says Dr. Lüder Hogrefe, CEO of Raytheon Anschütz.

In a special press conference held during SMM, ZF Marine Propulsion unveiled the expansion of its range of gearboxes for workboats. Anré Körner, the company’s head of product line, commercial and fast craft, says: “We get customer requests based on certain power, applications and accessories and we have now taken the position to develop this new series to really fulfill this demand.” The W10000, rated to 2,610kw (3,500hp) at 2,100rpm, is available with ratios from 2.0:1 up to 7.9:1, a feature also driven by customer demand for deeper ratios. This latest transmission can also be ordered in reversing, non-reversing and hybrid-ready (PTI) versions.

Efficiency-enhancing solutions are also what L-3 Systems International bets on. Among the highlights at the L-3 Stand were live presentations of the advanced navigation system NACOS Platinum along with a ship simulator with three large-sized screens, which attracted much attention. “We are more than satisfied with SMM and the feedback we received at our booth. We have established many new contacts and look to the future with great optimism,” says Ulrich Weinreuter, President of L-3 Systems International.

SKF Blohm + Voss Industries likewise used SMM to launch newly developed eco-friendly products. Apart from a GPS-controlled environmental surveillance system, the company, a subsidiary of SKF, had brought along an environmentally compatible stern tube sealing solution and a water/oil separator solution for lube oil. “Every two years SMM comes as a highlight in our business year. No other meeting place of our industry is as intimate as this fair. It is here we like to introduce our innovative solutions to the market. This year we had an especially wide range of innovations to offer. We are very satisfied with the response,” says CEO Martin Johannsmann.

The demand for high-tech was again apparent in the areas of offshore technology and deep-sea research: For example, marine propulsion specialist Voith supply their customers with essential equipment they need to succeed under extreme operating conditions in oil and gas exploration or the search for other natural resources such as manganese. Voith displayed a model of the construction vessel “High Flow 4,” which can operate with dynamic positioning in currents of up to 10 knots and promises to revolutionize the offshore market.

One of the key topics of this year’s SMM was LNG as a ship fuel. The demand for LNG technology concepts is strong. Wärtsilä, one of the leading manufacturers of ship engines, has been promoting more efficient ship propulsion systems for years. “Now we reap the benefits. More efficient engines are today a major trend across the shipping industry,” says CEO Björn Rosengren. Much experience has been gained already with land-based power generation systems. Now it is time for the shipping sector to embrace natural gas, he adds: “By 1 January 2015 at the latest, when stricter emission limits come into force for the North and Baltic Seas, this topic will be on top of the agenda,” says Rosengren. His prediction: “Today roughly 50 LNG-driven ships are sailing the world’s oceans. By 2020 there might be 1,300.”

One of the most impressive and innovative stands of the entire fair was that of DNV GL. To provide adequate space for lectures, panel discussions and debates, the world’s leading classification society had prepared the “DNV GL Forum,” a sizable auditorium right next to the company booth, which was used extensively.

“We developed this format for an even more intensive conveyance of content,” explains Andreas Bodmann, Head of DNV GL Maritime Direct Communications. “The core topics were operating safety, performance optimization and complex system management.” One year after the DNV/GL merger and the choice of Hamburg as the maritime division’s headquarters, DNV GL Maritime CEO Tor E. Svensen gave a particularly positive assessment of the merger there. The combined strengths of the company offers customers true value added, as well, he said, also adding praise for the innovative impetus coming from SMM: “As a technology-focused industry fair, it vividly demonstrates the massive innovative potential of the shipbuilding industry,” says Svensen at DNV GL’s first SMM. DNV GL was this year’s main sponsor of SMM.

Among the thought-provoking discussed by DNV GL was the potential for unmanned, battery-powered vessels to revolutionize the short sea shipping market.

It will be interesting to see in two years where that “innovative potential” when the marine industry meets again in Hamburg for SMM 2016, September 6-9, 2016.