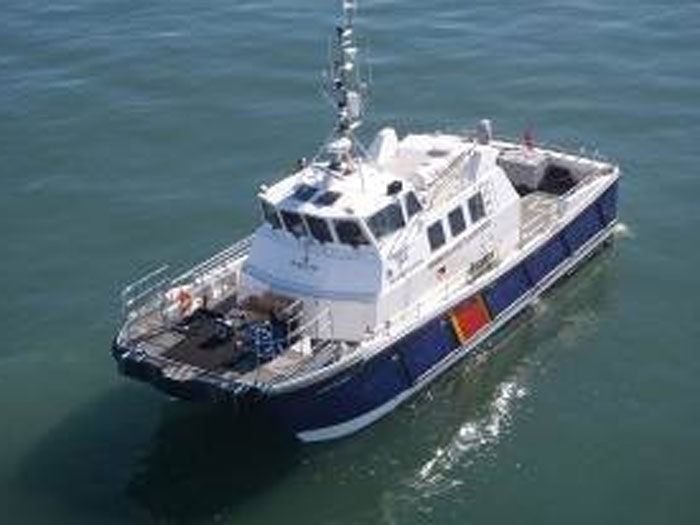 SEPTEMBER 4, 2014 — The U.K. Maritime and Coastguard Agency reports that the master of a 17 m waterjet propelled wind farm support catamaran has been made to pay £3,000 (about $5,000) in fines and costs after breaching maritime collision regulations.

According to the Maritime and Coastguard Agency, Geoffrey Whinfrey was in charge of the Island Panther, which is owned by Island Shipping of Wicklow Town, Co. Wicklow, Ireland, when it collided with a wind turbine in the Sheringham Shoal wind farm on November 21, 2012.

Mr. Whinfrey had been requested by the wind farm operator – Scira Offshore Energy Ltd – that the Island Panther take off duty employees ashore due to the worsening weather conditions. It was dark and the wind was gusting up to 45 mph, with driving rain and rough seas.

Passage plans had not been completed for any part of the journey. Mr. Whinfrey attempted to navigate through the wind farm using the safety lights on the wind turbine towers, which is against company policy. While passing through the wind farm he failed to notice that one of the turbine towers’ lights was not illuminated and subsequently hit that tower head on at approximately 12 knots.

The collision resulted in Mr. Whinfrey and his fellow crewman flying forward and hitting the control consul, plus people below were flung across the passenger cabin. Some of those onboard had to be taken to hospital with minor injuries and the vessel was also considerably damaged.

According to Island Shipping, the Island Panther is “strongly built, particularly in the bow area where it must withstand daily controlled collisions with boat landings.”

An investigation determined that the accident happened as Mr. Whinfrey was relying solely on the turbine safety lights and didn’t make good use of the lookout and navigation equipment on board.

Mr. Whinfrey pleaded guilty at Southampton Magistrates Court on Tuesday 2 September 2014 to breaches of Rule 5 of the International Regulations for Preventing Collisions at Sea, 1972. He was fined £1,000, plus £2,000 in costs.

“Mr. Whinfrey relied heavily on the lights of the turbine towers to navigate through the wind farm against company policy. He displayed poor seamanship by failing to keep a proper lookout by all available means appropriate in the prevailing circumstances. It was very lucky that no one was seriously hurt.”