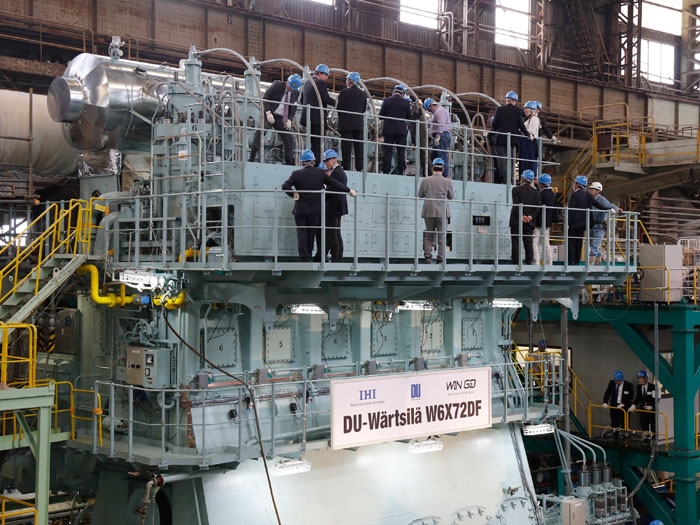 The engine demonstrated was the 72 cm bore Wärtsilä 6X72DF, installed as a technology demonstrator at the Aioi works of Japanese licensee Diesel United.

The engine was developed by WinGD and built in cooperation with Diesel United.

“Diesel United is our long term development partner in Japan; together, we have pioneered a considerable number of technical and product innovations. This large bore technology demonstrator installed in Aioi will enable us to showcase to customers worldwide the advantages of WinGD’s unique low-pressure dual-fuel technology offering economic and environmental benefits for their businesses,” says Martin Wernli, CEO of WinGD.

“It is our great pleasure to be the development partner of WinGD for the W6X72DF technology demonstrator,” says Takashi Nakanishi, President of Diesel United. “We consider the low-pressure dual-fuel technology offers major benefits like low emissions and safe operation to the shipping industry which will make it a success in Japan and worldwide”.

The close cooperation between Diesel United and WinGD has existed since 1948 and many milestones in the history of marine engine development have been achieved jointly.

The demonstration of the Wärtsilä 6X72DF in Japan follows completion of testing and demonstration of the RT-flex50DF low-pressure dual-fuel two-stroke engine at WinGD’s testing facility in Trieste, Italy. Together, the tests have confirmed the feasibility of bringing the benefits of low pressure gas admission to all of WinGD’s Generation X two-stroke engines for marine propulsion applications.

So far 25 engines with this technology have been ordered.

The low-pressure gas admission system being pursued by WinGD on its two-stroke DF engines is based on the lean burn Otto cycle – i.e. ignition of a compressed lean air-gas mixture by injection of a small amount of liquid fuel.

Reducing both first and operating costs, the use of low-pressure gas admission means that the gas fueling system on the X-DF engines does not require a high pressure electrically-driven compressor, considerably reducing energy consumption and giving the potential to dimension a ship’s auxiliary plant smaller, saving first costs.

With the Generation X-DF engines, WinGD is responding to demand from the larger generations of LNG carrier vessels being built in response to a global trend to natural gas, as new reserves are brought into production. At the same time, the company is addressing demand from owners of vessels such as tankers and containerships of all sizes, considering LNG fueling.

As the lifespan of vessels is usually measured in decades, and gas is expected to gradually replace liquid fuels in all engine applications, WinGD is also stressing the “future proof” aspect of its Generation X two-stroke diesel engines, which are pre-configured for a later retrofit with the low-pressure X-DF system.