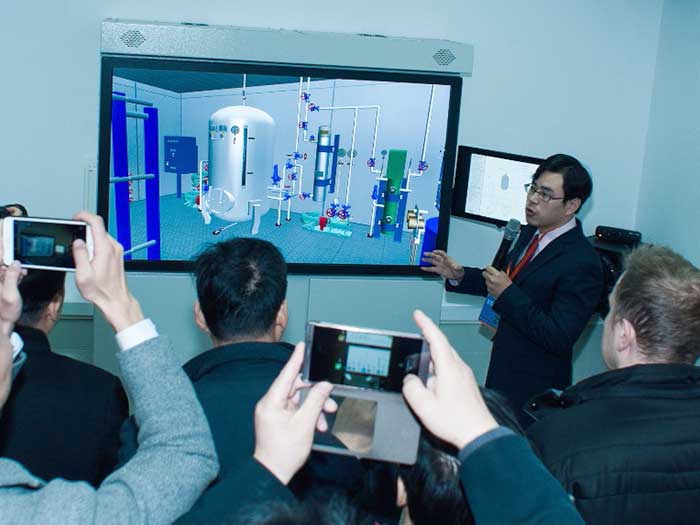 The recently inaugurated simulator joins a network of some 20 installations at strategic locations around the world.

As well as being the first installation of WinGD’s dedicated, multi-touchscreen simulation hardware in China, the Shanghai FMS system is also the first to be preprogrammed with specially adapted versions of the engine-specific W-Xpert simulation software WinGD develops with its partner Unitest Marine Simulators Ltd., based in Gdynia, Poland.

The FMS training facility at the Marine Power Academy, where some 500 crew are trained each year, is shared by Hudong Heavy Machinery and WinGD, and both report that the system is proving very popular with course participants.

Like the specially adapted W-Xpert software it runs, the FMS system is the result of a long-standing partnership with Unitest. To cover large training courses in which a whole engine room crew can work simultaneously, the FMS hardware system utilizes 18 touch screens located in up to four separate classrooms. In combination with the W-Xpert engine simulation software, it creates a multi-interface, virtual environment that includes not only the main engine but also all the auxiliary systems of a typical engine room.

Initially designed for use on personal computers and laptops or notebooks to provide a portable tuition tool, the W-Xpert software employs thermodynamic models of diesel and gas engine processes to give high levels of virtual reality. To date, the range of engines that can be simulated by the W-Xpert software comprises the X35, X62, and X72 models the WinGD X-generation of diesel engines, as well as the RT-flex50DF dual-fuel engine models. During 2017, the X82 and X92 will be added, followed in quick succession by more dual-fuel engine software versions.

“The advanced features of the W-Xpert software, like our proprietary thermodynamic simulation algorithms which are capable of calculating accurately engine performance parameters including fuel consumption and emissions levels, mean that the FMS system enables high fidelity simulations of functional and thermodynamic factors,” says Gregory Sudwoj, General Manager Technical Experts at WinGD. “The extensive, multi-interface virtual environment we can create also includes all the auxiliary systems of a typical engine room and enables a team to experience a wide range of simulations. To encourage decision making and to promote sharing of responsibility, these include both routine and distress situations. Overall, the scope of the FMS gives WinGD unique opportunities to familiarize engine crews with all the systems involved in operating an engine in a ship.”

The W-Xpert full mission simulator has been approved by classification societies for marine crew training and competence assessment in accordance with IMO STCW (Standards of Training, Certification and Watchkeeping for Seafarers) regulations.

WinGD says that whenever new two-stroke engines are delivered, always can provide the ship’s crew and technical staff with the operational training needed for the engines and ancillary equipment found in the engine room.

“During 2016 WinGD trained more than 350 personnel and the most popular tool for WinGD trainees is the W-Xpert virtual engine room simulator because it mimics very realistically situations happening on the bridge, in the control room and in the engine room at the same time,” says Mr. Sudwoj. “Previously, WinGD relied on a standard twin screen training but now, with the support of Unitest, we can use the FMS for navigating around the engine and control room. This enables numerous trainees to replicate and rehearse very real operating sequences, conditions and emergency situations.”

To ensure WinGD engine training is available worldwide, WinGD plans to offer high definition digital simulation training in strategic shipping industry locations around the world. With W-Xpert software, it is possible to provide basic operator training anywhere in the world using just a standard PC or laptop. However, the ideal crew training is provided using the high levels of simulation enabled by the FMS system.

WinGD trainers have been permanently located in the HHM Marine Power Academy in Shanghai since Summer 2015 and the W-Xpert FMS has been fully utilised ever since its inauguration.

Next month, W-Xpert Full Mission Simulators will also be commissioned in Athens Greece and Pusan Korea.