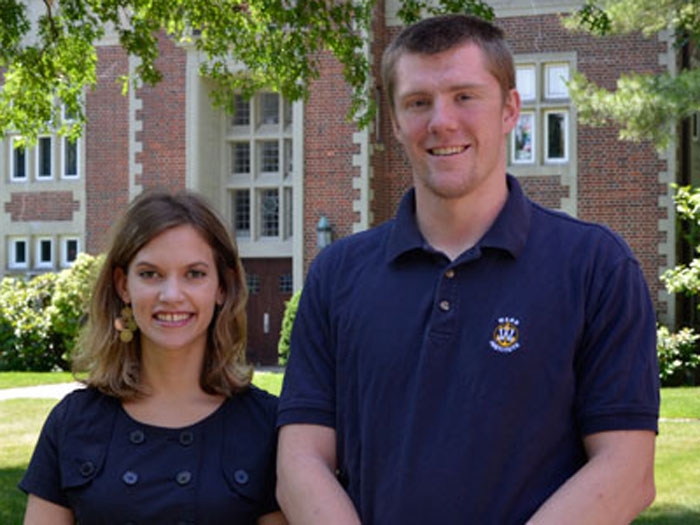 As chairman for both the social committee and Women of Webb, Ms. McElroy, (Class of 2015), is an active member of the school community. During the winter work term, she interned at Sparkman & Stephens, a naval architecture and yacht brokerage firm, and worked as an engine cadet at Stolt-Nielsen.

In addition to serving as a class representative for the leadership committee and working with Webb’s freshman mentoring program, Mr. Mills, (Class of 2016), is a member of the school’s soccer, basketball, tennis, volleyball and sailing teams. He has interned as an outside machinist for General Dynamics Electric Boat, the primary builder of submarines for the U.S. Navy, sailed on a Military Sealift Command tanker as an engine cadet and sailed aboard the tall ship USCGC Eagle.

“The Thomas B. Crowley Memorial Scholarship Program is a testament to Crowley’s commitment to higher education,” says Webb President R. Keith Michel. “Webb Institute is honored to be part of this prestigious program and are extremely proud of our relationship with the company.”

Since 1984, Crowley has provided more than $3 million dollars in scholarship funding for more than 1,000 students studying at maritime academies and other select institutions in the U.S., Puerto Rico and Central America.

In 1994, Crowley Chairman, President and CEO, Tom Crowley Jr., established the Thomas B. Crowley Sr. Memorial Scholarship Program, in honor of his father.

Webb Institute is a top-ranked undergraduate engineering institution offering one academic option, a double major in Naval Architecture and Marine Engineering. All admitted students receive a full-tuition scholarship. William H. Webb, the preeminent American shipbuilder of the 19th century, founded the college in 1889. It is located on the grounds of the former Herbert L. Pratt estate, “The Braes,” in Glen Cove, NY, on the Long Island Sound.