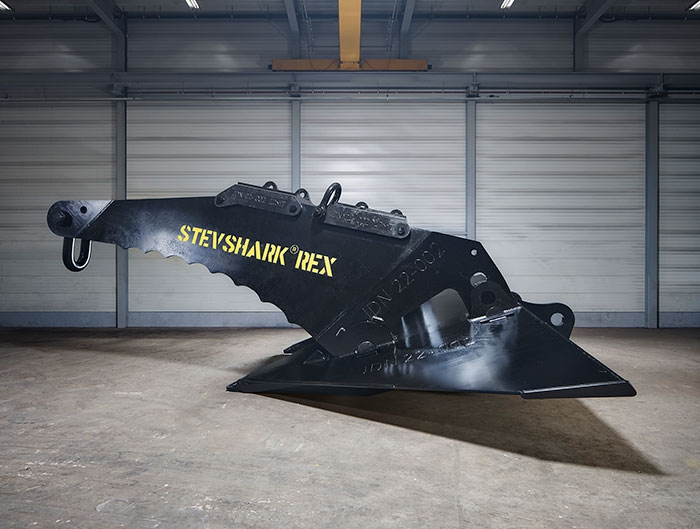 APRIL 27, 2018 — Vryhof Anchors has won a number of significant contracts for its Stevshark Rex anchoring solution. Introduced in April 2017, the anchor is available in versions ranging from 3 to 60 tonnes and features radical new fluke and shank geometries

“In April 2017 when we launched the Stevshark Rex, we promised that it would redefine the application boundaries of drag embedment anchors, bringing more remote areas in shallower waters but with harder soils into play for offshore drilling, production, dredging and construction,” said Vryhof Anchors Managing Director Leopoldo Bello.

He continued: “12 months on and we have a proven track record to support our claims. From the Northwestern Shelf in Australia to the Russian waters of the North Caspian Sea and from the Northern North Sea to the Indian Ocean and the Caribbean, we are opening up areas previously considered commercially unviable with conventional moorings and anchoring solutions.”

A contract to deliver twelve 16 tonne Stevshark Rex anchors to Perenco Congo SA to support permanent moored assets for the La Noumbi FPSO in the Yombo Field, offshore Congo. The field is characterized by irregular seabed, due to hard outcropping sediments and pockmarks – remnants of dewatering and/or degasification processes.

The delivery of Stevshark Rex anchors to Maersk Drilling offshore Trinidad and the Maersk Developer semisubmersible, where the anchor has a holding power of 47% more than previous anchors used in the area – block E of the East Coast Marine Area (ECMA).

The deployment of Stevshark Rex anchors to Dutch-based international EPC contactor CNGS Group in the Caspian Sea. According to Levgenii Ivankiv, Construction Manager for CNGS Group: “Compared to the weight and size of the concrete anchors and 18 tonne delta flipper anchors we previously used, the Stevshark Rex – in addition to the high holding capacity – is easy to handle, is relatively light and needs less space on the aft deck of the anchor handler. We also do not have to return to harbor all the time to reload.”

Kris Berghman of Jan De Nul Group said: “Vryhof Anchors has done everything the company could possibly do to offer us the ultimate outcome of our mooring challenge, managing to convince us theoretically and scientifically. The Stevshark Rex will definitely increase the overall operational efficiency of cutter suction dredgers in areas around the world where we could hardly dredge before.”

The Stevshark Rex has also undergone extensive testing in cooperation with Australian operator Woodside Energy at four different locations on the Angel oilfield in the North West Shelf of Australia. In fields selected due to the presence of calcarenite – a cemented and brittle rock – all four tests were faultless with the anchor able to keep the 243 tonne bollard pull AHTS in position during proof load tests.