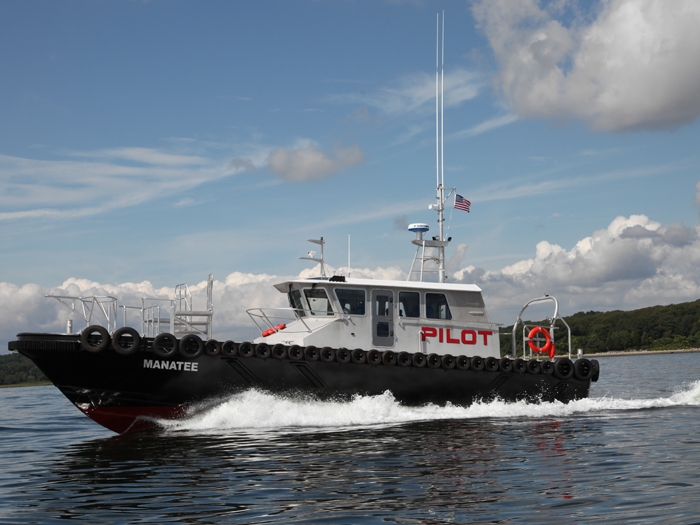 “Stability, reliability, support, speed and efficiency – these are the five criteria that we used to select the engine for the new pilot boat,” said Frank Rabena, a 17-year pilot and chairman of the association’s pilot boat committee. “We found the Volvo Penta D13 combined with the IPS3 easily met those criteria and became the power solution.”

Research began in 2011 when Rabena and the association’s port engineer, Mark Kampfmueller, visited the Volvo Penta facility in Sweden where they saw the IPS system firsthand and realized its potential.

“We saw the difference between a Volvo Penta IPS-propelled boat and a conventionally propelled boat. Over the years, we continued to research the technology and when it became time to build a new pilot boat we proceeded very cautiously,” said Rabena. “We knew the Tampa Bay Pilots Association had purchased a Gladding-Hearn Chesapeake Class pilot boat, the Manatee, with IPS propulsion. We went down to Florida, and after sea-trialing their boat, the benefits were obvious.”

“We operate every day, around the clock in every kind of sea condition. The IPS system has superior propeller thrust, which contributes to the maneuverability of the vessel,” says Rabena. “It gives us more control over the pilot launch and therefore more capability alongside a ship. With IPS, the house accommodations can be farther aft. This improves the comfort of the crew and passengers in rough sea conditions.”

On station 24 hours per day, 365 days per year, the pilots and their launches must be prepared to board ships in all weather and sea conditions, including hurricanes, northeasters, and dense fog. The Virginia Pilots complete approximately 7,000 boardings per year.

“Volvo Penta IPS is the perfect solution for modern pilot boats, consistently providing 20 percent faster speed, 30 percent lower fuel consumption, 15 percent faster acceleration and 50 percent lower noise and vibration levels when compared to a traditional shaft installation,” said Marcia Kull, vice president, marine sales, Volvo Penta of the Americas. “It is a true transformative technology that we believe will become the new standard in pilot boat propulsion moving forward. Pilot boat operators are experts – well-researched in propulsion solutions and acutely in-tune with the needs of their vessels, so it is promising to see that they keep turning to Volvo Penta time and time again.”