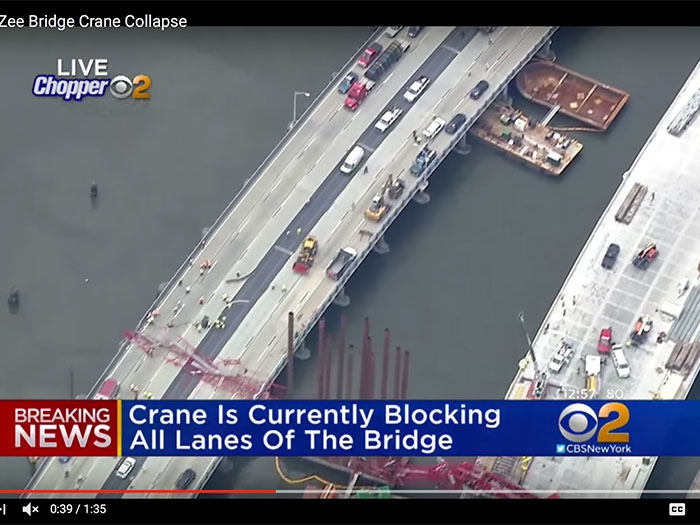 JULY 19, 2016 — Coast Guard crews are enforcing a safety zone on the Hudson River around the Tappan Zee Bridge after a crane collapsed this afternoon.

At approximately 12:15 p.m. Coast Guard Sector New York received a report of a partial crane collapse across the western end of the Tappan Zee Bridge, which has closed the roadway to traffic for an undetermined period of time.

A crane operator was safely recovered from the water by a Westchester County Marine unit after the collapse.

A small boat crew from Coast Guard Station New York is enforcing a safety zone around the site of the incident and will remain in place for as long as necessary.

The Coast Guard says that the major implications of the safety zone are as follows:

The cause of the incident is currently under investigation

.According to media reports, no cars were hit by the crane’s arm as it came down around noon, but Rockland County Executive Ed Day wrote on Twitter that three drivers suffered minor injuries when vehicles swerved and stopped to avoid the wreckage. He also said two bridge workers were hurt, and all were expected to survive.

Video from a news helicopter showed at least one person being removed from a car and loaded into an ambulance.

The New York Times quotes Jeff J. Loughlin, the business manager of International Union of Operating Engineers Local 137, the union that represents the crane’s operator, as saying that the operator remained at the scene with a union representative, and was expected to undergo drug and alcohol testing.

The bridge is crossed by 138,000 vehicles every day traveling between Rockland and Westchester Counties.

The Times says the crane’s crash raises concerns about the integrity of the Tappan Zee Bridege, which was built to last only 50 years after being constructed cheaply in 1955.

Rockland County officials said that the crash damaged the bridge, creating a hole in its deck.

“Our major concern is not so much the construction effort on the new bridge but the structural integrity of the old bridge,”  the Times quotes Mr. Day as saying.

The new bridge, which is scheduled to be completed in 2018, is one of the largest infrastructure projects underway in the United States.

Although a number of giant floating cranes are working on the project, the unit that collapsed was not one of them, but, according to media reports, was anchored on the roadway of the new bridge.

TV footage shows that broken pieces of its arm covered the distance between the new and old spans, as well as the entire 90-foot, seven-lane width of the existing bridge.

The crane was one of 28 working on the bridge. New York Governor Andrew Cuomo tweeted: “We do not know why the crane collapsed. It was a new crane performing a routine task. An investigation is underway.”

The new Tappan Zee Bridge has been under construction for three years and is expected to be completed by 2018 at a cost of $3.9 billion. It is being built alongside the original Tappan Zee span.

In March this year, a 90-foot tugboat sank after it hit a construction barge near the bridge site, with three crew members losing their lives.