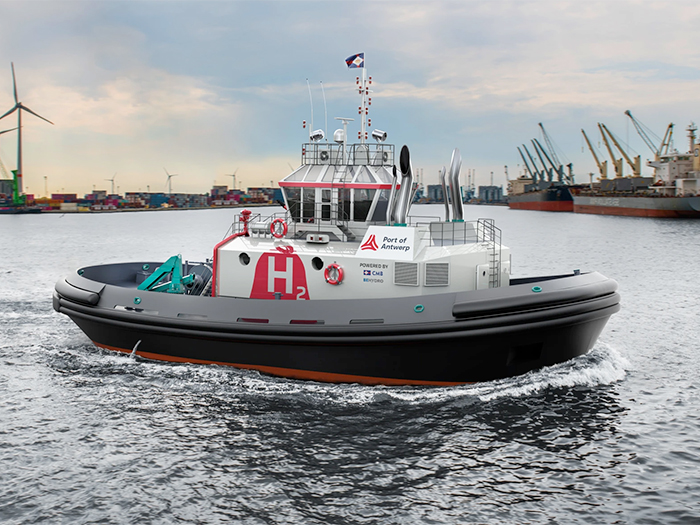 Belgium’s leading port, the Port of Antwerp has ordered construction of what will be the world’s first tug powered by hydrogen, the Hydrotug.

While most attention to hydrogen as a marine fuel has focused on fuel cell applications, the Hydrotug will be powered by combustion engines that burn hydrogen in combination with diesel fuel. The engines will also comply with the very strict EU Stage V emissions regulations.

The ultra-low-emission tug is being built by Compagnie Maritime Belge (CMB), whose innovation and development division, CMB Technologies, is pushing ahead on a number of hydrogen power projects.

By lending support to this promising technology, the Port of Antwerp hopes that the shipping industry will follow. The port is systematically pursuing a policy of making its entire fleet eco-friendly by incorporating the most environment-friendly technologies available on the market.

The combination of the tug’s dual-fuel technology with a state-of-the-art particle filter and catalyzer designed to meet the very highest standards will ensure that the Hydrotug is ultra-low-emission. Combustion of hydrogen does not emit any CO2, and the particle filter combined with the catalyzer will result in minimal emissions of NOx and particulates.

Construction is due to begin shortly and the Hydrotug is expected to be operational within two years.

CMB has teamed up with the Ghent-based engine builder ABC to set up the BeHydro joint venture with the aim of further developing the technology for medium-speed engines with higher power output. The Hydrotug will be the first vessel with an output in the 4,000 kW class to be powered by a hydrogen-diesel dual fuel engine.

“We are convinced of the potential of hydrogen as the key to sustainable shipping and making the energy transition of a reality,” says Alexander Saverys, CEO of Compagnie Maritime Belge. “The expertise that we acquire with the Hydrotug will enable us to further develop the use of hydrogen as a ship’s fuel.”