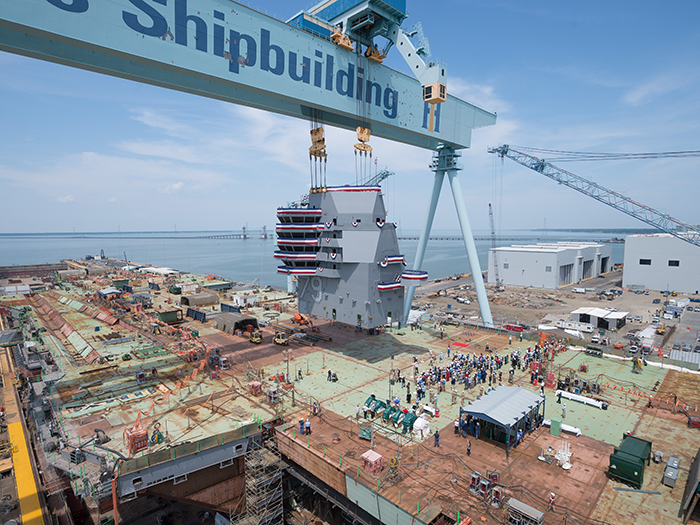 HII landed the island onto the flight deck of aircraft carrier John F. Kennedy (CVN 79) during a ceremony at the company’s Newport News Shipbuilding division on May 29, 2019. Photo by Matt Hildreth/HII

The event coincided with the birthday of the ship’s namesake, former President John F. Kennedy.

“Landing the island is a key milestone in preparing the ship for launch in the fall,” said Jennifer Boykin, president of Newport News Shipbuilding. “Reaching this milestone on schedule demonstrates the significant lessons learned we are applying to this ship’s construction, as well as the strides we’ve made to use new technologies to gain efficiencies.”

The ship is being built in sections, each with more outfitted equipment—valves, pipe, electrical panels, mounting studs, lighting, ventilation and other components—than in any other aircraft carrier built at Newport News.

The use of new technologies, including digital work instructions that provide shipbuilders digital 3-D data versus traditional paper drawings, has increased efficiency and productivity.

With the island, Kennedy is more than 90% structurally complete. The island stands 72 feet above the flight deck and is 56 feet long and 33 feet wide.

In keeping with U.S. Navy tradition, Capt. Todd Marzano, the ship’s prospective commanding officer, placed his aviator wings underneath the island during the ceremony. This custom, known as mast-stepping, recognizes an ancient maritime custom of placing a coin at the base of a mast of a ship under construction to bring good fortune.

Caroline Kennedy, John F. Kennedy’s daughter, serves as the ship’s sponsor. She could not participate in the event but shared a 1964 silver Kennedy half dollar that Marzano placed under the island house.

“The island landing is an important milestone in the life of this ship,” Kennedy wrote in a letter. “I know how proud my father would be of the ship that will bear his name and the patriotism and dedication of all who sail in her.”

Kennedy is scheduled to move from the dry dock to an outfitting berth in the fourth quarter of 2019, three months ahead of schedule. The ship’s christening is planned for later this year.