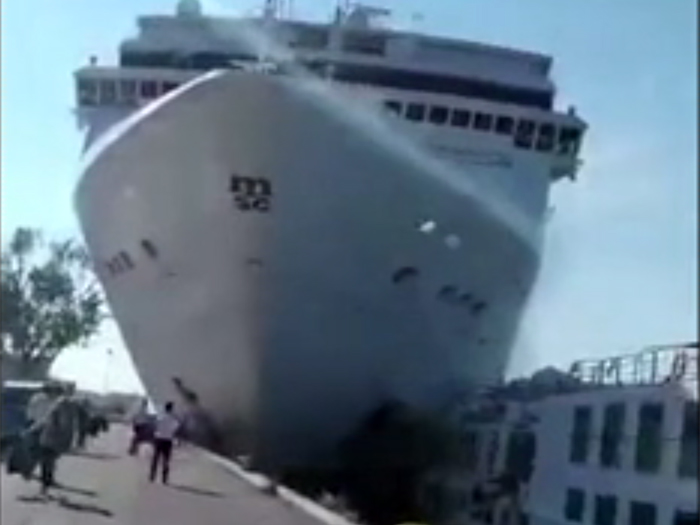 Five passengers on a Venice tour boat were injured after MSC Cruises 65,591 gt cruise ship MSC Opera plowed into it, then scraped alongside a pier earlier today. Cell phone video posted on YouTube showed onlookers on the quayside fleeing in panic.

The incident has renewed calls for large cruise ships to be banned from Venice’s canals.

The MSC Opera was approaching the VTP Terminal to berth, assisted by two tugs, when, according to Italian media reports, a mechanical problem caused the engine to surge. Though the ship immediately cut power, its momentum carried it forward and the tugs were unable to stop it, with one tow line snapping.

This morning at around 8.30am the MSC Opera, while maneuvering towards its berth ready to dock had a technical problem.

The ship was accompanied by two tugs and struck the berth near San Basilio and then consequently collided with a river boat.

An investigation is underway to understand what happened exactly and the company is working closely with the local authorities.”

Environmentalists have long said that waves caused by the cruise ships have eroded the underwater supports of buildings and have polluted Venice’s waters.

In June 2017, an activist group called No Grandi Navi (No Big Ships) held an unofficial referendum in which Venetians voted in favor of banning the ships from the city’s lagoon.