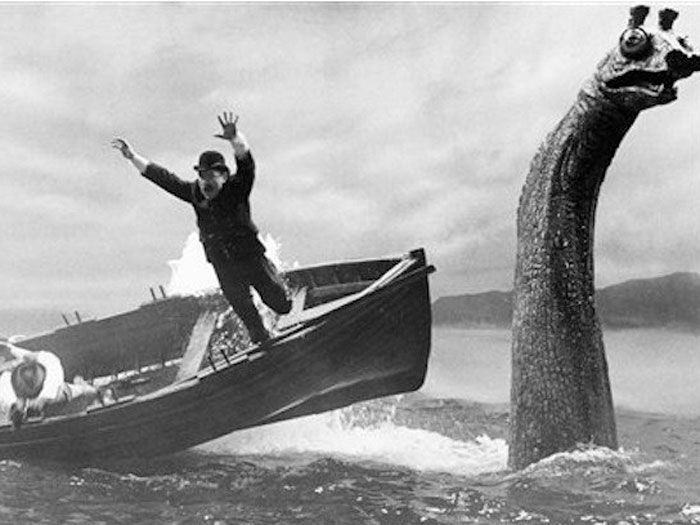 No, that's not a Kongsberg survey team member. It's Dr. Watson being attacked by Nessie in the 1970 Billy Wilder movie "The Private Life of Sherlock Holmes"

APRIL 14, 2016 – Kongsberg Maritime Ltd, the U.K. division of Kongsberg Maritime, reports that it has discovered Nessie. Well, not a living, breathing Loch Ness Monster as such, but a long lost movie prop, used during filming of the 1970 Billy Wilder movie “The Private Life of Sherlock Holmes.”

The discovery was made during a survey of Loch Ness, led by Kongsberg Maritime Ltd and supported by the Loch Ness Project and VisitScotland.

Operation Groundtruth is the first survey of its kind in Scotland, making use of Kongsberg Maritime Ltd’s recently-launched Munin AUV (Autonomous Underwater Vehicle). The highly accurate underwater vehicle features groundbreaking sonar and camera equipment, which provide the ability to map vast areas up to a depth of 1,500m at incredibly high resolution.

The Munin AUV detected the Nessie model during a survey of parts of Loch Ness.

As Loch Ness has a reputation of being incredibly difficult to survey, the state-of-the-art Munin will undoubtedly reveal brand new information regarding the Loch.

Craig Wallace, senior subsea applications engineer at Kongsberg Maritime Ltd is excited to be back at a favorite location.

“Kongsberg Maritime Ltd began surveying Loch Ness with some of the world’s first multibeam sonar back in 1987. Over the years, the company has returned many times, bringing the latest technology to uncover the Loch’s mysteries,” say Mr. Wallace. “We expect to uncover new information from the Loch during this survey, as Munin is the most advanced low logistics AUV on the market and is the first of the next generation AUVs from Kongsberg Maritime. Merging the cutting edge technology from the commercial sector whilst maintaining the robust reliability from the military market, the vehicle is providing insight to the Loch’s depths as never before imagined. Finding Nessie was, of course, an unexpected bonus!”