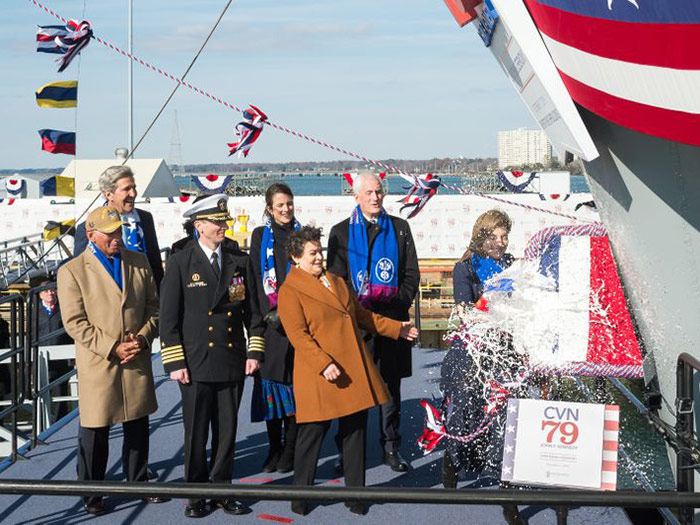 Former U.S. ambassador Caroline Kennedy, the ship’s sponsor and daughter of President Kennedy, smashed a bottle of American sparkling wine across the bow to christen the ship. During her remarks, she reflected on christening the second aircraft carrier named in her father’s honor.

Decommissioned in 2007, the earlier USS John F. Kennedy (CV-67) was the last conventionally powered carrier built for the U.S. Navy.

“This ship will represent the ideals he lived by – courage, sacrifice and belief in freedom – and it will help make real his vision of a more just America and a more peaceful world,” Kennedy said. “I’m so proud to be sponsor of this ship and to join with all of you to bring her to life. I look forward to being part of her odyssey and of her extended family. Most of all, I hope she will carry my father’s spirit with her as she sails, his leadership in wartime, his courage in crisis and his commitment to the hard and steady work of building peace.”

“As we observe ‘a date which will live in infamy’ on this 78th anniversary of the Japanese attack on Pearl Harbor, this magnificent vessel we see before us today is a symbol of our nation’s strength, of our technical achievements and of the critical service our men and women in uniform provide for this nation and the entire world,” said Charles Frank Bolden Jr., a retired U.S. Marine Corps major general and former NASA administrator, and astronaut who served as the principal speaker. “This carrier is also a tangible example of the legacy of a great man who risked his own life volunteering for hazardous duty in the Pacific during World War II in the wake of Pearl Harbor, and later came to embody a time of optimism that he translated into a vision for taking humans beyond the sphere of our planet.”

Since the first cut of steel in February 2011, more than 5,000 shipbuilders have helped to construct Kennedy, and suppliers from 46 states have contributed specialized parts, skilled services and support to aircraft carrier production. In the weeks following the christening, the carrier will be launched into the James River and moved to a pier where outfitting and testing of the ship’s systems will continue until the ship is delivered to the U.S. Navy in 2022.

“President John F. Kennedy taught us that deterrence will always cost less than war,” said Thomas Modly, acting Secretary of the Navy. “The purpose of our military, including this warship that bears his name, must be to ensure our nation’s commitment to peace and prosperity for all nations of the world.”