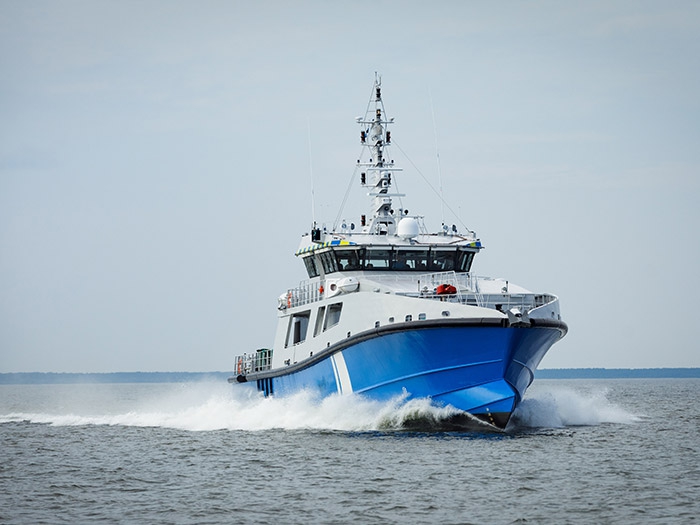 SEPTEMBER 19, 2018 — With the Baltic Sea set to become an Emission Control Area in 2021, the Estonian Police and Border Guard Board has taken delivery of the Raju, a 45 m high-performance, low-emission patrol ship with a wave-piercing bow and a hybrid electric propulsion from Danfoss Editron.

The hybrid propulsion plant provides a maximum speed of 27 knots, while economic cruising speed is 10-12 knots. A fully integrated electrical and energy storage system offers the option to run the vessel on a full electrical mode and reach the speed of 10 knots.

The aluminum-hulled vessel is the largest patrol vessel ever built by the Baltic Workboats shipyard in Saaremaa, Estonia, and the first in the yard’s emerging range of battery hybrid patrol ships.

Faced with the need for a power solution that reduced emissions and allowed quiet cruising for stealth security operations – as well as reliability and power for rapid response – Baltic Workboats turned to Danfoss and the Editron marine system. The power generation and distribution solution had to be highly compact given the very tight space constraints of workboats, as well as flexible and custom-designed to best fit with the new design wave-piercing patrol vessel

It was important that the power system should offer engine redundancy so that even if the main engines should fail, the vessel would still be able to run on auxiliary or battery systems. The system also had to be capable of smoothly and efficiently transitioning between its high-performance operation and low-speed cruising modes.

The Danfoss solution is a parallel hybrid power system that supports the vessel’s two MTU 16V4000 main engines with a smaller diesel-engine-driven power plant and electric machines coupled to main engines by gearboxes. The Editron hybrid electric system generates electricity when running at speeds of up to 27 knots, providing power to vessel electronics, as well as storing this power in batteries, and, vice-versa, also enabling fully-electric propulsion at up to 10 knots.

The entire power plant and power distribution system is controlled by Danfoss’s propriety software system, which decides whether one or both of the vessel’s smaller VolvoPenta diesel-electric auxiliaries will suffice if the patrol vessel can be run on battery power, or if it should run on PTO power from the main engines only.

The Danfoss solution allows the captain to automatically or manually decide to operate the vessel with or without electric power. The captain can focus on responding to emergencies at hand or choose to switch to fully-electric mode, for example, when wishing to reduce noise for the sake of the crew or in undertaking stealth anti-smuggling operations.

“We chose Danfoss because the Editron is a compact, high-quality and very flexible system, and the needs of the crew made it an excellent project to build as a hybrid vessel” says Baltic Workboats Head of Technical Department Peeter Raamat. “For example, the hybrid electric benefit of engine redundancy is important for the Estonian Coast Guard — in case of engine failure, you can switch to diesel-electric or batteries — while you also have improved fuel efficiency, and much lower noise levels in diesel-electric and fully-electric modes when compared to big diesel engines, which is a big benefit for the crew.”

Danfoss Editron Project Manager Jani Hartikka says: “With changing regulations, I see that the demand for such hybrid electric solutions will grow rapidly in the near future as ship owners switch to electrical vessels to reduce their CO2 emissions. Creating this unique vessel together with Baltic Workboats already puts us on the front line of development, ready to respond to what will soon be a huge demand for clean, high-performance vessels. We’re thrilled to be working with Baltic Workboats closely in pioneering hybrid patrol boat development, and look forward to supporting them with a cleaner driving force as they ramp up production of this new wave-piercing hybrid patrol boat range.”