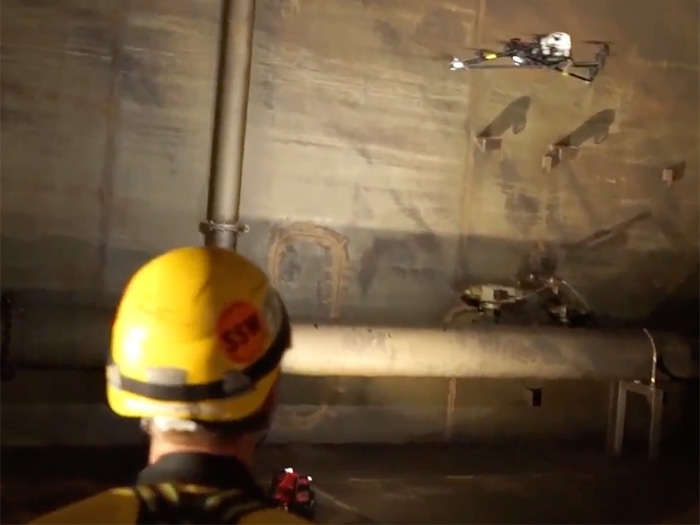 NOVEMBER 1, 2017 — Livingston, U.K., headquartered Cyberhawk Innovations, a specialist in using drones — more formally unmanned aerial vehicles (UAVs) — for inspection and survey has been certified as an External Specialist by the American Bureau of Shipping (ABS) in providing inspections for internal tanks.

The certification means that the data captured by Cyberhawk’s UAVs can now be used by ABS surveyors to make decisions affecting classification surveys of cargo oil tanks (COT) and other bulk storage tanks on vessels.

As part of the certification procedure, Cyberhawk completed two internal tank inspections on an Aframax class oil tanker in Portland, Oregon. They were carried out in collaboration with an ABS Surveyor, who examined all safety and inspection processes required to accept Cyberhawk’s inspection technique. The two inspections were part of a larger project, involving a survey of all 14 COTs using a drone on a sister vessel.

The project was completed in just six days by the Cyberhawk team.

Aside from significant time savings and efficiency improvements, the use of UAVs by experienced operators minimizes risks to personnel, offering a safer, more economical solution for detailed structural inspections.

One current industry method for COT inspection on tankers is a technique called rafting. This involves filling the tank being inspected with water, allowing the ship surveyor to use a raft or dinghy to view critical inspection areas of the tank, inaccessible from the tank floor. Rafting creates a large volume of oil-contaminated water which has to be decanted from the vessel at a port that can handle such waste. Using a UAV eliminated the generation of oil-contaminated water and the safety risks associated with rafting.

ABS auditors carried out a detailed review of Cyberhawk’s UAV equipment, operator training, and maintenance and inspection processes both at Cyberhawk headquarters in Scotland and onsite in the U.S.

“UAVs are enabling the next generation of marine and offshore surveys and inspections, providing less intrusive, safer and more efficient ways of assessing critical areas,” says ABS Chief Surveyor Joseph Riva. “By applying ABS guidance, Cyberhawk was able to demonstrate its ability to carry out drone inspections and surveys, which can support the class survey process and provide additional savings and efficiencies to the owner and shipyard.”

Chris Fleming, CEO at Cyberhawk, said: “The feedback received from the auditors confirms what we already know – that UAVs offer an incredibly efficient solution when it comes to asset inspection, across a multitude of industrial sectors. Few methods offer the same safety, time and cost advantages.”