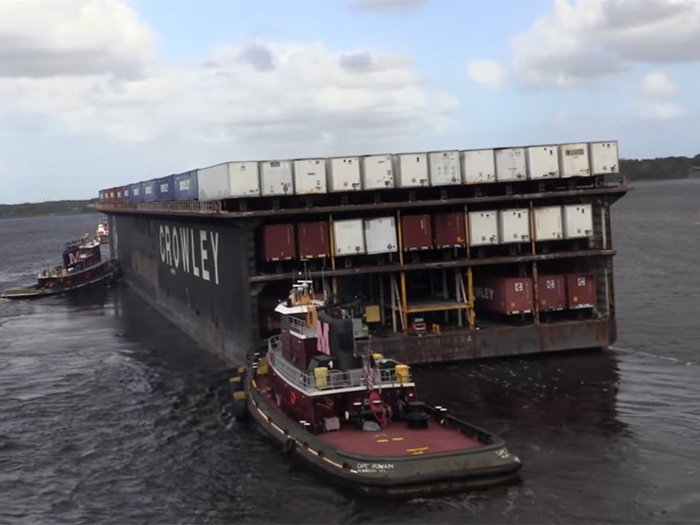 OCTOBER 12, 2017 — With employees working around the clock and its vessels calling the Port of San Juan almost daily, Jones Act operator Crowley Maritime Corp. had, as of the end of last week, offloaded more than 6,500 loads of FEMA and commercial cargo from 20 vessels since Hurricane Maria struck Puerto Rico in late September. The company projects that another nine vessels, carrying between 2,500 and 3,000 loads, will arrive in Puerto Rico this week.

“I am very grateful for the extraordinary work of our teams in San Juan, Jacksonville and in other parts of the country,” said Tom Crowley, chairman and CEO. “Many of these employees – as well as response professionals at the Federal Emergency Management Agency (FEMA) and other government agencies – are military service veterans who learned disaster response logistics in Afghanistan, Iraq, and other tough environments. Many of our employees have friends and family directly affected by the disaster. Their tireless commitment and focus on getting results is truly impressive and deserves our respect and appreciation.”

Noting the island will have needs extending beyond response activities, Crowley said, “While emergency response work continues, it is not too soon to begin focusing on how Puerto Rico’s needs can be met over the longer term. We look forward to working as a coalition with government and business to help Puerto Rico rebuild and come back stronger than ever.”

Much of Crowley’s hurricane relief effort is being directed by its logistics division, which has a dedicated team providing drayage, direct deliveries, deconsolidation, inventory control, and final mile deliveries in Puerto Rico, along with a team on the U.S. mainland coordinating trucking, cross docking, and cargo deliveries to the ports for ocean transport.

“With our logistics operation, we are storing goods at our Guaynabo distribution center and releasing products once they are needed, said Ayesha Diaz, general manager of Crowley’s logistics operation in San Juan. “We have also been supporting airport operations providing forklift equipment and operators to expedite the handling of air freight.”

Crowley’s logistics group now has more than 375 trucks being used for distribution activities on the island, and the team is supporting FEMA with regional distribution capabilities in Ceiba, Aguadilla, and the Luis Muñoz Marín International Airport in San Juan.

“I am very pleased and appreciative of the efforts our truck drivers have made to speed relief cargo to those in need,” said Frank Larkin, senior vice president and general manager, logistics and commercial services. “We were the only logistics provider that had truck power – albeit limited at the time – available as soon as the U.S. Coast Guard reopened the port in San Juan. The port was reopened at 8 a.m. on Sept. 23, the first Crowley vessel was in discharging cargo at 10 a.m., and many of our truckers were right there to deliver relief cargo to FEMA’s distribution center when no other trucking or logistics company was providing transportation services on the island.”

As featured in a new video detailing the operations out of Jacksonville, a steady stream of vessels – almost one per day – is providing the island with a pipeline of food, water, fuel, building materials, machinery, equipment and much more.

“Crowley’s vessel calls and loads carried since the onset of the storm is more than double our normal weekly volume,” said Crowley’s John Hourihan Jr., senior vice president and general manager, Puerto Rico services. “Most of the additional cargo consists of water, ready-to-eat meals and other relief supplies, as well as utility trucks, fuel trucks, and many other types of rolling equipment on behalf of FEMA.”

“We have responded to immediate and projected longer-term needs on the island by adding six vessels to our fleet to ensure there is plenty of cargo carrying capacity between the mainland and Puerto Rico,” Hourihan said.

Meanwhile, commercial cargo operations are beginning to come back on line as customers reopen stores and begin to restock shelves.

“When you consider that many people lost everything in the storm, all cargo is relief cargo, whether it comes from FEMA, a retail store or a grocery,” said Jose “Pache” Ayala, vice president, Puerto Rico services. “That’s why the recovery of our commercial customers is so important.”

Congestion on Crowley’s Isla Grande Terminal in San Juan continues to be a challenge, though improvement has been realized. The pace of loads being dispatched from the terminal and trucked out to locations on the island has gradually improved to near the normal rate of 400 to 500 loads per day. While this has helped clear some of the backlog, the additional volumes brought into the port have kept the total loads awaiting dispatch at more than twice the normal amount.