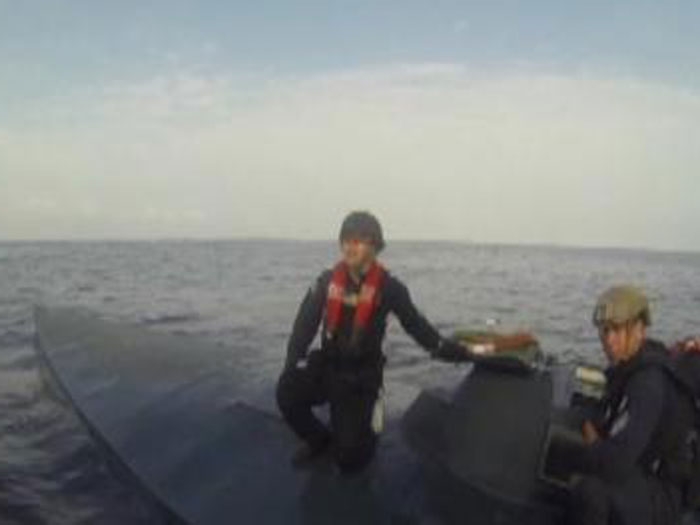 The crew aboard a U.S. Customs and Boarder Protection P-3 Long Range Tracker aircraft had detected the vessel March 2, while conducting counter-narcotics operations with Joint Interagency Task Force (JIATF) South. The task force coordinated an interdiction of the semi-submersible with the Coast Guard Cutter Bertholf from Alameda, CA.

Coast Guardsmen from Bertholf entered the SPSS numerous times to retrieve contraband and evidence. Boarding officers from Bertholf also discovered a loaded gun in the cockpit of the vessel.

“Transnational organized crime groups continue to adjust their tactics to avoid detection indicated by a recent rise in the use of SPSS vessels,” said Vice Adm. Charles Ray, commander, Pacific Area. “Despite these efforts, we will continue to execute an offensive strategy that targets, attacks and disrupts these dangerous criminal networks.”

Since June 2015, the Coast Guard has interdicted five SPSS vessels. The narco subs are constructed for illicit trafficking with a mostly submerged hull; a cockpit and exhaust pipe are visible just above water. The vessels are extremely difficult to detect and interdict because of their low-profile.

In the first narco sub interdiction of 2016, the crew of the Coast Guard Cutter Northland interdicted an SPSS approximately 280-miles southwest of the Mexican-Guatemalan border in January. The suspects in that case scuttled the smuggling vessel as Coast Guardsmen arrived at the scene but were safely apprehended.

“SPSS interdictions are inherently dangerous, yet we persevere to disrupt the funding sources of illicit organizations causing violence and instability in Central America,” said Capt. Laura Collins, commanding officer of the Cutter Bertholf. “Our boarding teams are trained to constantly assess and prioritize the safety of our personnel and the SPSS crew during the case.”