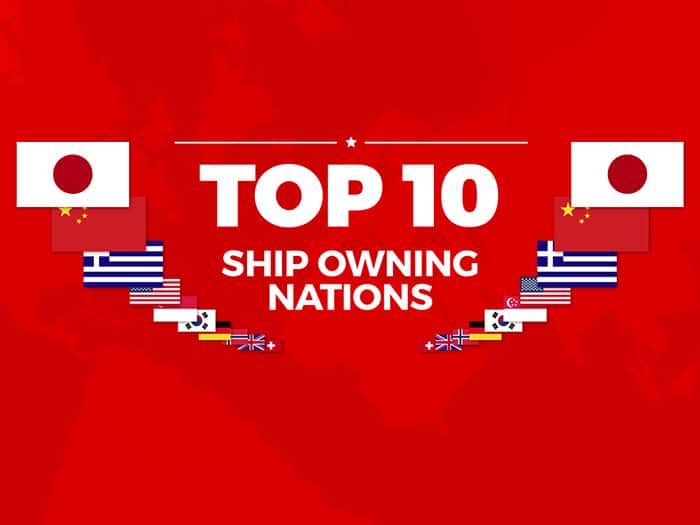 In terms of fleet value, Japan has moved back up to first after falling to second last year, currently owning a total of $196.6 billion in assets. This is an increase of about $9 billion year on year and is largely due to the current boom in the LNG sector.

Rate levels have been stratospheric this year for the LNG sector, with earnings at an all time high of $41,385 a day in October, bringing up values for the entire fleet. This has also sparked an ordering spree across the LNG sector and a total of 142 new orders have been placed so far this year, an increase of about 92% year on year. Of these orders, around a quarter were placed by Japanese companies including MOL, NYK and Meiji Shipping.

Out of the top ship owning countries, Japan owns the highest value fleets for LNG vessels at $30.3 billion, bulkers at $53.5 billion and also reefers at $985 million, small dry at $8.8 billion LPGs at $8.7 billion and vehicle carriers at $22 billion

Though China holds the first place this year in terms of number of vessels owned, with a total of 6,908 vessels, it falls behind Japan in terms of current fleet value, at $190.1 billion. China, however, owns the largest containership fleet both in terms of vessels and values. The unprecedented increase in rates seen over the last two years has boosted the value of the Chinese box ship fleet from about $28 billion at the start of 2021 to about $56 billion today,

China also owns the largest number of tankers. Consequently, the recent surge in rates and values has moved China up the ranks to second place in terms of fleet value, up by $15 billion from last year to $42.5 billion. Tanker rates have surged since the beginning of 2022 with the TD3C-TCE Middle East Gulf to China, increasing from $14,966 per day to a peak of $78,876 per day in October. The surge in rates has also prompted interest in sale and purchase activity; a total of 950 secondhand sales have been recorded so far this year, an increase of c.10% year on year;15% of these sales were made by Chinese companies including CMB, Cosco and ICBC.

Greece has retained its third place spot both for total number of vessels by fleet and by value. However for tankers, Greece has been knocked off the top spot for the number of vessels by China, but in terms of value ranks highest with a tanker fleet value of $56.2 billion, Improved earnings have sparked renewed interest in this sector, with VLCC earnings peaked at $72,199 per day, the highest levels seen in over two years. This is primarily due to improved demand, alongside the impact of the ongoing conflict between Russia and Ukraine. Values have increased by 14% to 86% across VLCCs, Suezmaxes and Aframaxes since the start of the year.

Greece is also the owner of the second most valuable LNG fleet worth $29.1 billion. With current spot rates soaring, this has brought up the value of the fleet by over 50% from the start of the year, with an increase in value of around $10 billion from last year.

The U.S. remains in fourth place with a total of $98.6 billion in assets, up over $2 billion from last year.

Of the total value in assets, $54 billion is accounted for by cruise ships. This comes as no surprise as the largest cruise companies, Carnival and Royal Caribbean, are both U.S. based. Over the last few years, this industry has been severely affected by the COVID-19 pandemic. The U.S. still retains its position as the largest global cruise ship owner, despite its fleet value decreasing by a total of $2.5 billion since last year.

According to VesselsValue, the U.S. is also a prominent owner in the RO/RO sector, with the largest fleet in terms of value with a fleet worth $2.3 billion. However, with 38 vessels, the U.S. comes second to Japan, which own 82 vessels.