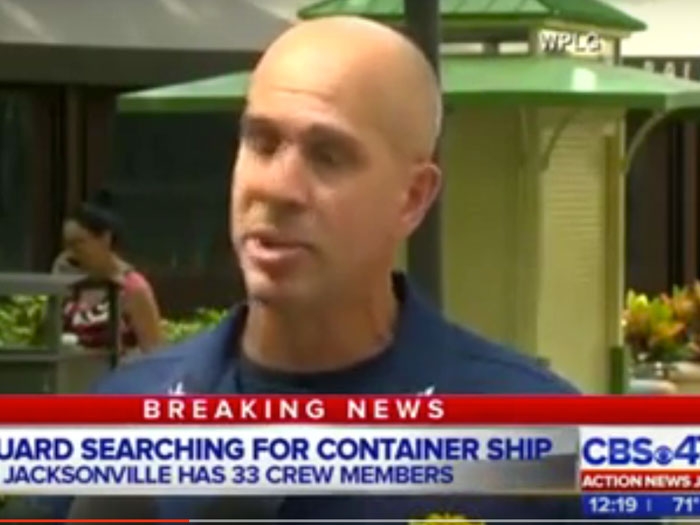 At press conference today, Captain Mark Fedor of USCG's 7th District, said Coast Guard was pushing its assets to their operational limits in the search for ship and its crew

The El Faro, a 735-foot TOTE Maritime RO/RO cargo ship, was en route to San Juan, Puerto Rico, from Jacksonville, FL. At about 7:30 a.m. Thursday, watchstanders at the Coast Guard Atlantic Area command center in Portsmouth, VA, received an Inmarsat satellite notification stating the El Faro was beset by Hurricane Joaquin, had lost propulsion, and had a 15-degree list.

The crew reported the ship had previously taken on water, but that all flooding had been contained.

Watchstanders at the Coast Guard 7th District command center in Miami launched an HC-130 aircrew out of Clearwater, FL, to search for the El Faro.

As of this afternoon, Coast Guard watchstanders and rescue crews had still been been unable to reestablish communications with the El Faro crew.

At a press conference today Coast Guard Captain Mark Fedor said the Coast Guard was pushing its assets to their operational limits in the search for the vessel and the 33 people on board.

At the time of the El Faro's departure, the vessel's officers and crew were monitoring what was then Tropical Storm Joaquin. As of 720am EST on Thursday October 1, TOTE Maritime Puerto Rico lost all communication with the El Faro. The US Coast Guard was immediately notified and since then we have been unable to reestablish communication.

There are a number of possible reasons for the loss of communications among them the increasing severity of Hurricane Joaquin.

TOTE Maritime Puerto Rico's primary concern is for the safety and well-being of the 33 individuals on board.

We are working to ensure clear and frequent communications with their families and loved ones as we learn more.We have reached out to the families of those impacted and have established open lines of communication to provide them with timely updates. Our thoughts and prayers are with the individuals and their families.

TOTE Maritime Puerto Rico is working closely with the US Coast Guard and all available resources to establish communication by whatever means possible.

OCTOBER 2, 2015 — The U.S. Coast Guard says search and rescue crews are continuing to search for a containership with 33 crew members aboard reported to be caught in Hurricane Joaquin, near Crooked Island, Bahamas.