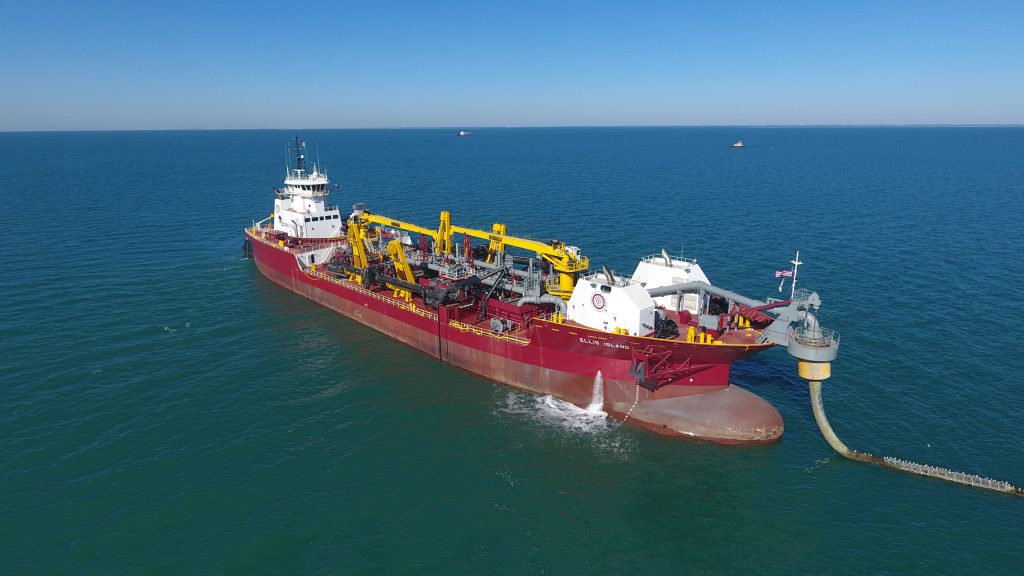 Magdalen arrived at Southport, North Carolina, January 2 and is now working on one of the state’s most critical projects: the protection of Highway 12 in the Buxton area on North Carolina’s Outer Banks.

Over the course of three and a half years, more than 250 shipyard employees at Eastern Shipbuilding in Florida were involved in the construction of the vessel.

“Weeks works hard to identify and understand growing markets in the U.S. and is constantly evaluating new opportunities to meet new demand,” said Eric Ellefsen, Weeks’ Executive Vice President. “We are particularly attentive to the U.S. Army Corps of Engineers’ program, and have been pleased by the strong growth in our second home, Louisiana, as the state fights coastal erosion and the loss of valuable wildlife habitat.”

David Simonelli, President of Great Lakes’ Dredging Division commented, “We are excited to take delivery of this advanced vessel which improves the competitiveness of our hopper group and represents a substantial capital reinvestment in the Great Lakes dredging fleet. Ellis Island significantly increases the United States commercial Jones Act hopper fleet capacity as the largest hopper dredge in the United States market, with a carrying capacity of 15,000 cubic yards.”

Manson Construction Company placed into service the 30-inch ABS cutter suction dredge Robert M. White in July 2017. Constructed by Halimar Shipyard, Morgan City, LA, the vessel was named in honor of a long-term Manson employee who was a leader in maritime industry safety.

Frederick Paup, Chairman of the Board of Manson Construction Co., stated, “We are proud that Robert M. White is a U.S.-built, U.S.-flagged, and U.S.-crewed vessel that will focus on the coastal restoration and maintenance dredging markets of the United States. We will continue to invest in the U.S. dredging market to help our stakeholders accomplish their missions.”