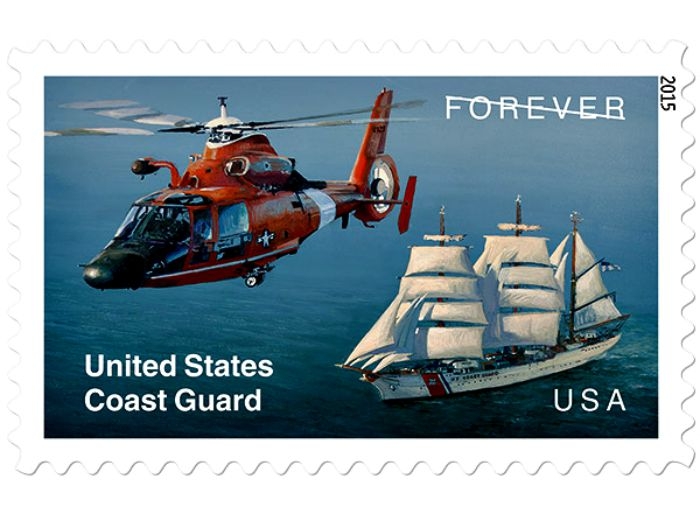 The roots of the U.S. Coast Guard stretch back to August 4, 1790 when President George Washington signed the Tariff Act that authorized the construction of 10 cutters to enforce the federal tariff and trade laws. The Revenue Marine, the forerunner of the Coast Guard, was suggested by Secretary of the Treasury Alexander Hamilton.

The U.S. Postal Service commemorated the Coast Guard’s 225 years of service to the nation by creating a Forever Stamp to honor its role in protecting the security of the nation and advancing vital U.S. maritime interests. The stamp shows two icons of the Coast Guard: the cutter Eagle, a three-masted sailing ship known as “America’s Tall Ship,” and an MH-65 Dolphin helicopter, one of the Coast Guard’s rescue aircraft.

“Stamps tell America’s story and it is a great honor for the Coast Guard to be memorialized on our 225th anniversary in the Forever Stamp collection. For 225 years, the Coast Guard has proven its enduring value to our nation. We warmly welcome this tribute and the opportunity to share our story with the nation we serve,” said Zukunft. “It’s a time to remember and celebrate the hundreds and thousands of Coast Guard men and women who’ve gone to sea – and sometimes paid the ultimate price – in boats, cutters and aircraft so that others may live.”

Postmaster General Brennan spoke to the significance of the service being featured on the Forever stamp. “The Coast Guard is truly a symbol of safety to all Americans. Those who live in a coastal community, or spend time on our waterways and shores, know that the Coast Guard does whatever it takes to ensure that they are safe and protected,” she said.

As the keynote speaker, Secretary Johnson said, “We are here to commemorate the Coast Guard’s past, but I am most excited about the Coast Guard’s future. We should all be impressed by the dedication and excellence of the men and women who occupy the ranks of today’s Coast Guard.”

“I see this service growing and growing, taking on more missions, taking on more and more terrific young people like those I saw graduate from basic training last week, who are from all over the country,” said Johnson. “I salute you, thank you for your service, and, from this new member of the family, I wish you happy anniversary.”