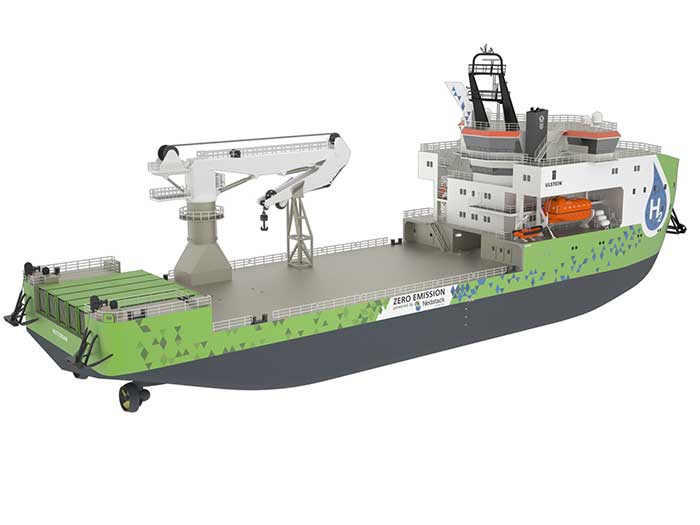 Norwegian shipbuilder and designer Ulstein says it is ready to deliver a zero-emission offshore construction vessel within three years.

FIRST VESSEL CAN BE DELIVERED IN THREE YEARS

With current technology, the Ulstein SX190 design is already able to operate in zero-emission mode for four days. However, with the rapid developments in hydrogen storage and fuel cell technologies, a future zero-emission endurance of up to two weeks is targeted. For extended missions and capabilities, the vessel can fall back on its more conventional diesel-electric system using low sulfur marine diesel oil.

The SX190 Zero Emission design is based on Ulstein’s existing SX190 vessel platform and has a total installed power of 7.5 MW, of which 2 MW is generated by a fuel cell power system, typically Nedstack Proton Exchange Membrane (PEM) fuel cells, which are located in a separate, 2nd engine room.

PEM fuel cells convert hydrogen and air into electric power, heat and water and produce no harmful emissions in the process. Nedstack fuel cell systems have already been built and proven in the multi-megawatt power ranges and have now been marinized to meet the requirements of the marine industry, including class requirements and supply chains.

The PEM fuel cells used in the SX190 Zero Emission design are fueled by hydrogen from containerized pressure vessels, a well proven and readily available technology. These hydrogen storage containers can be loaded and unloaded by normal container handling operations and equipment. Hence, eliminating the need for expensive bunkering infrastructure and providing worldwide operational flexibility.

The hydrogen containers can be refilled at hydrogen production sites, either from industry by-product hydrogen or green hydrogen from electrolysis, making the vessel globally employable.