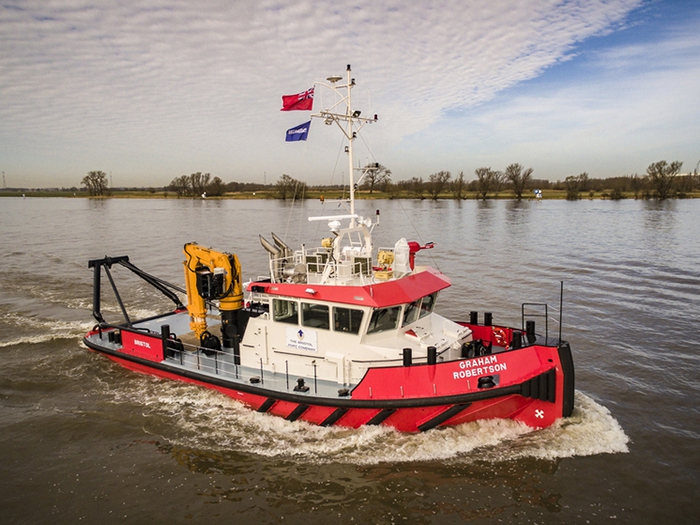 MARCH 29, 2017 — The U.K.’s Bristol Port Company has taken delivery of a Damen Shoalbuster 2308S. Modified with several customized options, the vessel will be able to take on a multifunctional role that includes plow dredging, towing, pilotage and survey duties. This is the first contract between Damen and the Bristol Port Company.

Construction of the new 23-m long Shoalbuster took place at Damen Shipyards Hardinxveld, in the Netherlands. During the handover ceremony on March 17, the vessel was officially named Graham Robertson.

The Bristol Port Company will use the Graham Robertson for a variety of functions and the adaptability of the Shoalbuster 2308S design enabled the shipyard to install numerous extra equipment items.

For the primary role of plow dredging, the Graham Robertson has an aft-mounted A-frame.

“Being able to plough dredge will ensure the maximum available depth of water can be maintained within the dock,” says Bristol Port Company Deputy Haven Master Christopher Jones, who says that the vessel will also be used for buoy maintenance and installation and repair works. “For this her hydraulic deck crane will prove invaluable,” says Mr. Jones.

Adding to the Shoalbuster’s versatility, the contract also called for a dismountable pilotage platform to allow for occasional piloting tasks, firefighting equipment and a towing hook.

“A truly multipurpose port craft was a strict requirement when finalising the vessel’s specification,” says Mr. Jones. “Introducing such a multipurpose vessel will allow the port to greatly increase the level of work it can undertake in-house, leading to financial savings.”

Damen Shipyards Hardinxveld delivered the vessel just 15 weeks after contract signing. “It is an honor to work with the Bristol Port Company for the first time – delivering this compact, multifunctional vessel within a tight time frame,” sayd Arjen van Elk, Damen U.K. Sales Manager. “We look forward to seeing the Graham Robertson prove itself as a valuable asset in the Bristol Port Company’s ambitions for growth and development.”