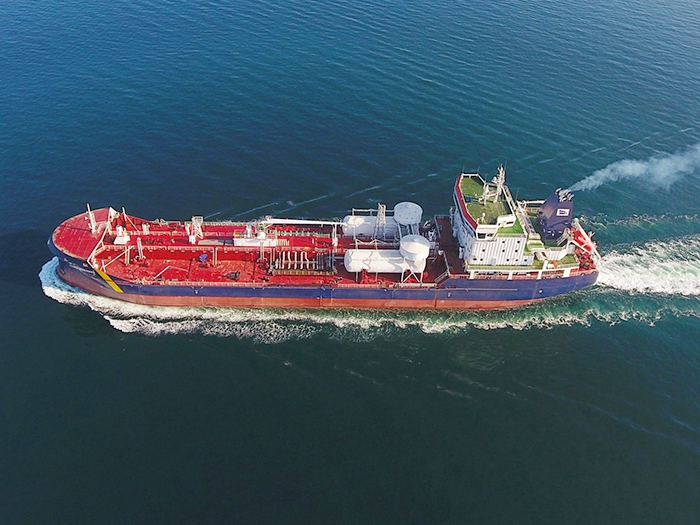 The Polar 7 certified Damia Desgagnés is the first dual-fuel powered Canadian-flagged tanker and the first-ever asphalt carrier of this type.

Powered by a Wärtsila 5RT-flex 50DF engine developing 5,450 kW, she is capable of operating on any of three types of fuel: heavy fuel oil, marine diesel oil or liquefied natural gas (LNG).

To ensure exceptional maneuverability and increased safety, she is equipped with a variable pitch propeller, a 750 kW bow thruster, a 550 kW stern thruster and a dynamic positioning system.

Desgagnés says that LNG refueling distribution networks for vessels without specific service points and trading various routes remain a major challenge, but they are under development in collaboration with different partners such as Gaz Métro and the ports of Quebec and Montreal.

“LNG has a bright future in maritime transportation and Desgagnés will actively contribute to broadening its use” says Mr. Louis-Marie Beaulieu, Chairman of the Board and Chief Executive Officer of Desgagnés.

The ship is named in honor of Mr. Beaulieu’s younger brother, Mr. Damien Beaulieu, who passed away prematurely in 2015.

Since last August and in addition to receiving training in Canada, over 15 Desgagnés crewmembers and managers have traveled to Turkey in order to familiarize themselves with the Damia Desgagnés’ dual-fuel propulsion system and special features and technologies, in addition to participating in the ship’s various verifications, inspections and trials.

“The reward is there in the pride of being part of the commissioning of a ship that is so much on the leading-edge with regards to environment and safety,” says Mrs. Marie-Claire Dusseault, Chief Officer aboard the vessel.

The M/T Damia Desgagnés is scheduled to weigh anchor around April 10. She will most likely make a first delivery in Europe before heading to North America, where she should arrive mid-May, all subject to the cargo that she will carry.