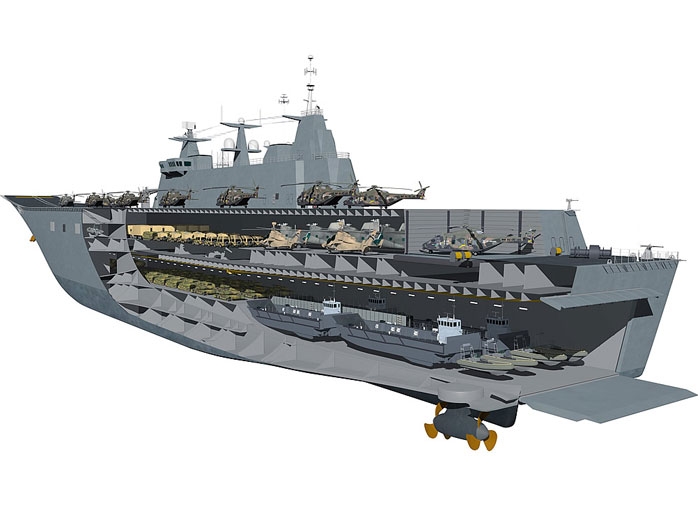 MAY 10, 2015 — Turkey’s Undersecretariat for Defense Industries (SSM) has signed a contract reportedly worth close to $1 billion with Sedef Shipbuilding, Inc., Turkey’s largest private shipyard. It covers design and construction of an LPD ship based on the Spanish Navy’s Navantia designed and built LHD Juan Carlos I.

Navantia is participating in the SMM contract as a technological partner and will provide design, transfer of technology, equipment and technical assistance to Sedef for local construction.

Navantia will also provide several components and systems, including the engines and the IPMS (Integrated Platform Management System).

The design is adapted to Turkish Navy requirements.

The 231 m ship will carry a battalion-sized unit of 1,200 troops and personnel, eight helicopters and three unmanned aerial vehicles. It will transport 150 vehicles, including battle tanks and will have a ski jump at the front of the deck that can be used to launch fighter aircraft.
Navantia has a contract for two similar ships in Australia, the already delivered Canberra and the Adelaide, set to commission in the fourth quarter of this year.