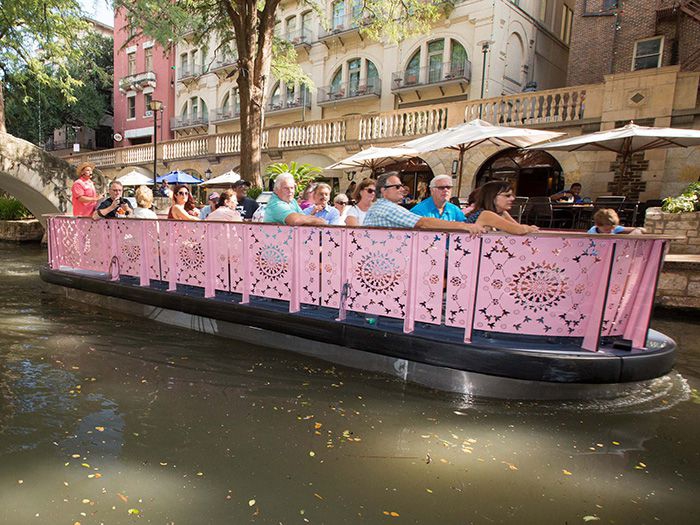 Each of the Torqeedo powered river barges on the San Antonio River Walk can be configured and modified in a range of floor plans to support touring, dining, commuting, entertaining, and other applications

NOVEMBER 29, 2017 — The new fleet of 43 custom river barges ordered by the City of San Antonio, TX, from Superior, WI, based Lake Assault Boats (see earlier story) for operation on the iconic San Antonio River Walk are powered by electric propulsion systems from Torqeedo.

Each 27 ft. vessels is driven by a complete Torqeedo electric propulsion system, including a Cruise 10.0 electric outboard engine and 16 Power 26-104 lithium batteries. The system is designed for automatic recharging with a built-in shore power connection onboard. The Torqeedo propulsion systems are designed to be virtually maintenance free with minimal downtime.

“Sustainability and care for the environment were a top priority for the new fleet,” said John Jacks, City of San Antonio Center City Development and Operations Director. “These new boats give passengers a unique experience, cruising smoothly and quietly through the San Antonio River, consuming no fuel and keeping our air clean.”

The new barges typically cruise at four knots and can normally operate up to 12 hours without recharging, according to the barges’ operators.

The barges seat 40 passengers and and can be configured to support multiple roles for tours, dining, water taxis, entertaining and special events, such as the annual Ford Holiday River Parade.

The San Antonio River Walk is a network of walkways along the banks of the San Antonio River lined by restaurants, shops, bars, theatres, museums, parks and the city’s major tourist attractions. It is an important part of the city’s identity and urban fabric, and has inspired similar projects in other cities across the United States and Latin America.

Torqeedo is part of the Deutz Group, a leading independent supplier of diesel and natural gas engines.

Lake Assault Boats is a subsidiary of Capstan Corporation, which is also the parent company of Fraser Shipyards.