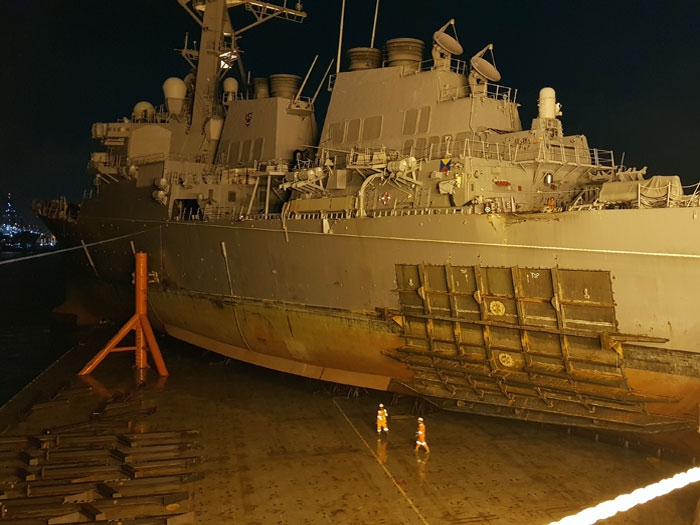 The guided missile destroyer USS John S. McCain (DDG 56) being loaded on to the heavy-lift transport ship MV Treasure prior to being transported to Fleet Activities Yokosuka for repairs

OCTOBER 11, 2017— The U.S. Navy has relieved the Commanding Officer and Executive Officer of the guided-missile destroyer USS John S. McCain (DDG 56), which was involved in the deadly collision with the 50,700 dwt tanker Alnic MC on August 21. The collision resulted in the deaths of 10 sailors, injuries to five others, and millions of dollars in damage to the ships.

In the announcement by Vice Adm. Phil Sawyer, Commander, Seventh Fleet said both the Commanding Officer, Cmdr. Alfredo J. Sanchez, and Executive Officer, Cmdr. Jessie L. Sanchez, were relieved “due to a loss of confidence.”

“In addition to that operational pause, I’ve directed a more comprehensive review to ensure that we get at the contributing factors – the root causes – of these incidents” said Admiral Richardson in a Facebook video.

The move followed the second collision in three months in the Pacific region. The USS Fitzgerald (DDG 62) collided with the containership ACX Crystal on June 17, resulting in the deaths of seven sailors. The USS Fitzgerald is expected to arrive at Huntington Ingalls Inc.’s Ingalls Shipbuilding facility in Pascagoula, MS, in December for repairs.