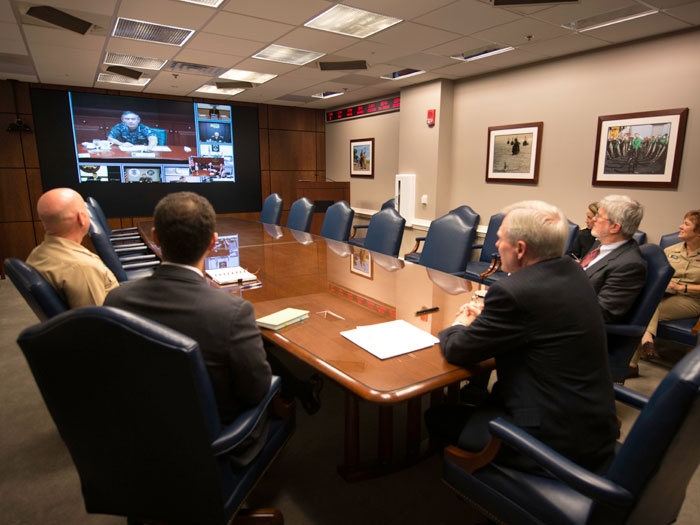 DECEMBER 20, 2013 — As Secretary of the Navy Ray Mabus video teleconferenced yesterday with Navy brass to discuss the husbanding contracting issues that broke with the Glenn Defense arrests, the New York Times was breaking a story that saw a third company suspend an executive.

The Times reports that the third firm, Multinational Logistic Services, known as MLS, is the Navy’s largest ship supply company, with $346 million in contracts for ports in Africa, the Mediterranean, Central America and the Pacific.

The newspaper says that in early 2011, as the Navy was evaluating its bid to provide services in Africa, MLS “hired an executive named Akbar Khan, who had worked at a rival firm that was then — and still is — under federal investigation for overcharging the Navy for supplies and port services.”

Citing “people close to the investigation,” The Times reports that “the Justice Department, with the Navy’s help, was investigating the rival firm, Inchcape Shipping Services, after former employees alleged that Mr. Khan had been involved in questionable billing practices while he headed its Middle Eastern and African operations.

“But while that investigation was underway, Mr. Khan took a similar job at MLS. Later that year, the Navy awarded the company the Africa contract, estimated at $52 million, and has given it additional business since.

The Times says that Mr. Khan on Thursday denied doing anything improper, and he has not been charged with wrongdoing.

In response to questions from The New York Times, MLS on Wednesday placed Mr. Khan on paid leave, citing what it called “the seriousness of the allegations,” while it reviews the matter.

The statement said that placing Mr. Khan on leave “should not be construed in any manner to indicate that MLS had knowledge of or agrees with the veracity or otherwise of the allegations.”

Citing the ongoing investigation involving Glenn Defense Marine Asia, Secretary Mabus reiterated his long-standing commitment to the prevention of fraud and other unethical behavior and emphasized the need for the Navy’s senior leaders to actively participate in those efforts to combat these practices throughout their chains of command. He stressed that it is both the ethical violations, and the appearance of ethical violations that needed to be avoided by all who serve in positions of responsibility.

Secretary Mabus expressed his commitment to identifying ways to improve and protect Navy processes against those who would engage in criminal or other behavior that takes tax dollars away from warfighters and their ability to protect the nation.

Finally, Secretary Mabus reiterated that the recent investigations are due to the behavior of a few, and that “the majority of Sailors, Marines, and Civilians in the Department of the Navy work in an ethical and honest way to keep the Navy and Marine Corps the most powerful expeditionary fighting force in the world.”