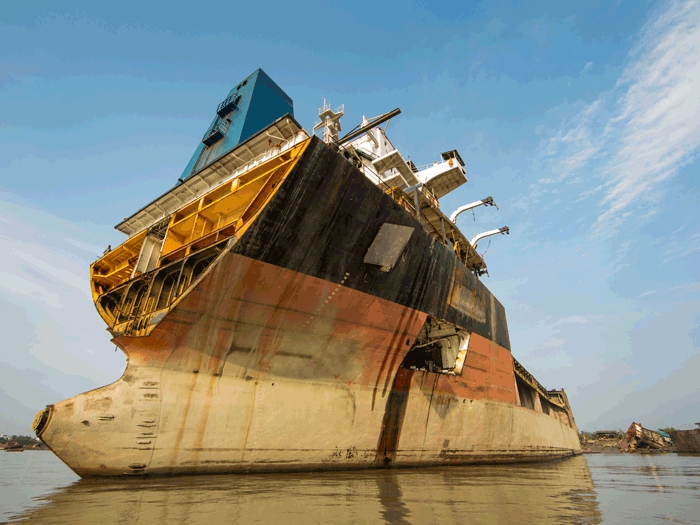 When is it time to send your ship to the graveyard?

To lay-up a vessel means to stop using it for a certain period. It will simply be anchored in appropriate waters or a berth for a few weeks or even a couple of years. The reasons for the lay-up might be to postpone over-capacity or to wait for a better scrap price before selling it. However, lay-up costs need to be taken into account, too.

For example, a six-month lay-up of a Capesize bulker in Malaysia’s Labuan costs between $1,000 and $2,000 per day— far less than the cost of operation which hovers around $7,000 a day, but an investment, because the longer the vessel is in lay-up the higher scrap steel or charter prices have to rise.

Scrapping a vessel means selling it to a ship-breaking yard where workers will cut it to pieces and recycle the steel and other metals, chemicals, and equipment. The owner will receive a price based on the total light displacement ton (LDT) of scrap metal the vessel contains; equipment is taken into account, too.

The market demand defines the LDT price, which is at its lowest in many years. Just recently buyers were offering $270/LDT (as of May 2016), a year ago Capesize bulkers could easily fetch $100/LDT more, and two years ago the figure was $200/LDT more.

Can higher LDT prices be expected? Well, the number of bulkers sold for scrapping is expected to rise throughout 2016 (according to Peter Sand, BIMCO)—this is strengthening the supply. Furthermore, in Asia demand for steel is currently low.

How to lay-up a ship?
Just as the lay-up time can vary, the treatment of vessels varies too, and so do obligations and requirements assigned by class, flag state and port authorities. In general, all responsible parties should be informed. For example, some insurance companies may accept a payment hiatus if the vessel is in lay-up for more than 30 days.

The operator must first decide on either a hot or a cold lay-up. In a hot lay-up condition the ship engines and machinery keep running so that the re-commissioning of the vessel can be carried out very quickly, allowing a cheap and easy vessel preservation. However, with long-term low charter rates in mind, many opt for a cold lay-up, which has lower operational and crew costs, and requires less consumables.

In a cold lay-up vessels are only supplied with emergency energy for lights, windlass/mooring winches and fire extinguishing—often by portable generators installed on deck. Depending on the length of lay-up, three weeks or more should be expected for re-commissioning. Should the lay-up be five years or longer then the re-commissioning time is unpredictable and can last months. The main concern here is protection against humidity, leakage of chemicals and condition of the hull (sea chest/sea water lines).

A dehumidifier has to be installed and connected to the engine room; other items to keep in mind are sea-water tanks, ballast tanks and bow thruster rooms.

Classes, Flag States and Port Authorities
Many classes and port authorities expect minimum manning levels during cold lay-ups to cover at least fire, leakage, mooring and security watch. However, the Safe Manning Certificate applies only to vessels in operation or while vessels are safely at anchor, within port limits or alongside. Requirements of flag states and port authorities apply to laid-up vessels. Flag states in general require notification of vessels laid-up for longer periods—the requirements vary from short notification to a detailed lay-up plan.

In addition, during the lay-up class surveys might take place. For example, DNVGL may carry out an annual lay-up survey (covering watertight integrity, bilge system, fire hazards and equipment in use). After lay-up a number of surveys have to be carried out and expired certificates need to be renewed. Some class authorities require a sea trial when the vessel has been laid up for 12 months or longer.

Green ship breaking?
It seems more environmentally friendly to take old ships out of service than to lay them up for later usage, especially as many were built in times when speed was more important than HFO efficiency.

Indeed, ship breaking can be environmental friendly; approximately 85% of a vessel can be recycled – even the furniture and carpets are sold at local markets in Bangladesh and India. However, the problem is that many shipyards do not handle hazardous chemicals as they should, and consequently the lives of workers are endangered. Rising public awareness has prompted the involvement of authorities leading to the Hong Kong Convention and EU Ship Recycling Regulation. Only time will tell whether these efforts will actually improve environmental and working conditions.

Some yards in China, Turkey and India/Bangladesh are already pre-approved and comply with the Hong Kong Convention and/or the EU Ship Recycling Regulation. However, green recycling often only happens on paper. In this respect the , “Ship Breaking Platform” should be considered, as it does not recognize any yard in India to be green and claims it to be a marketing coup.

Conversely some yards in Europe are recognized even by the NGO as environmentally friendly. For example, Fornaes in Denmark cooperates with the Ship Breaking Platform. Keld Kokholm, Manager of Fornaes, explains: “In general, the offered price per LDT is lower than that which non-environmentally friendly yards in Asia offer due to the expensive recycling of toxic substances and higher labor costs. Furthermore, we and some other European yards are sometimes limited by the size of vessel that we can handle. For example can we recycle ships up to 10,000 tonnes GT or 25 meters in width.” Fornaes therefore focuses on local offshore and fishing ships.

Other companies involved in green ship recycling like Grieg Green AS, can handle big vessels. Grieg Green approves yards based on a list of factors including the safety of workers and downstream waste management, all influenced by the HKC and EU regulation. Here, too, responsible acting results in a current price difference of $70 – $90 per LDT. As stated by Magnus Hammerstad, Area Manager of Grieg Green, this figure is volatile and is related to the local scrap steel price.

Why go green?
Companies which plan to maximize their profit will sell their vessel to a so called cash buyer (a ship broker) who in turn will beach it somewhere in Bangladesh, India or Pakistan. This way the original ship owners avoid regulations and legal trouble.
Recently Maersk opted to recycle the Maersk Wyoming and the Maersk Georgia in a ship-breaking yard in Alang, India which is not on the EU list of green ship breaking yards. Maersk stated that it expects to generate an additional $1 million to $2 million per ship by beaching there.

She pointed out that in addition to new regulations, an increasing number of cargo owners as well as ship financers are demanding ship-recycling policies from ship owners. In the future ship owners may lose both financers and clients if they continue to use substandard shipbreaking.

KLP, the largest Norwegian pension fund, published a report on the human rights and environmental risks related to the current practice of ship breaking.

KLP CEO Håvard Gulbrandsen, states in the report’s foreword: “We hope that the report can help raise awareness of the severe human and environmental risks beaching can entail for shipping industry companies, their customers, and also for other investors […]”.

AUGUST 11, 2016 — It is always a financial decision whether to lay-up a vessel or sell it to a ship-breaking yard. In recent years it has become a more frequently made decision, but how do you sell a ship for scrapping or laying-up? (Extended coverage from Marine Log’s August 2016 issue) By Andreas Bargfried, Owner & Founder of CODie software products