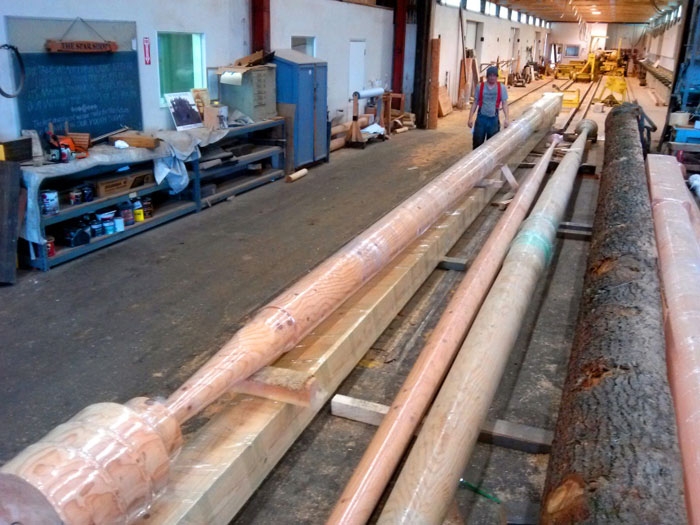 APRIL 16, 2014 — The largest tall ship to be built in the U.S. in the past 100 years is coming closer to completion. Work on the 200 ft, three masted, square rigged SSV Oliver Hazard Perry is underway at several locations. The ship’s hull is at the Senesco Marine shipyard in Quonset, R.I; its wooden spars are being turned and shaped at the Spar Shop at Grays Harbor Historical Seaport in Aberdeen, WA; and the rigging is taking shape in Portsmouth, RI.

All these elements will come together later this spring in Portsmouth, R.I. to comprise a Class A tall ship that will be  is Rhode Island’s official Sailing Education Vessel.

“The Perry is a modern, steel-hulled ocean-going civilian sail training vessel, with a 13½ story rig and 20 sails (made by Hood Sails in Middletown, RI) with 14,000 sq. ft. of sail area,” says the ship’s captain, Richard Bailey. “Her design is based on centuries-old tradition, but her equipment is anything but antiquated.”

In addition to her three decks, modern galley and Great Cabin, the Perry will have, among other things, high-end navigation and communication systems, a state-of-the-art science lab (designed under the guidance of the University of Rhode Island’s Graduate School of Oceanography), and wheelchair accessibility (including accessible below deck staterooms, heads and a wheelchair lift).

The Great Cabin will be used primarily for education in its capacity as a classroom outfitted with monitors displaying real-time navigation and meteorological data. Oher classroom space will house laptop computers (donated by Intel), interactive SMART boards (donated by Shanix Technologies, Inc.) and a well-stocked library.

“Below decks, she is really not like any other tall ship that is sailing out there today,” says Captain Bailey, who notably ran HMS Rose for 20 years before it was bought by Hollywood producers for the movie Master and Commander. “Above deck, however, she is a completely traditional tall ship, and in that respect there are many artisans who will have had a hand in contributing to her character.”

Among those are Alan Richrod and his crew at the Spar Shop, which is said to have the largest spar lathe in North America, if not the world. Thus far they have completed 11 of the 19 spars ordered for the ship, including the mizzen, main mast and royals for each; fore top mast and gallant; mizzen gaff; boom; and jib boom. )

The jib boom required the largest piece of wood in terms of board feet (53 feet long and 16½ inches in diameter before shaping), and the largest of the yards being made is the main course yard (lowest on the main mast); it is currently 12,000 pounds (weight before water evaporation) and was cut from a 65 foot log that only weeks ago was a tree standing in a forest.

“In all, the spars we are making for the ship weigh more than 35.5 tons and total 25,182 board feet — that’s enough to build a house of over 3700 square feet,” said Mr. Richrod, who estimates the masts and yards will be delivered cross-country to Newport in late April.

Riggers have come in from all over the country to work on SSV Oliver Hazard Perry’s six miles of traditional rigging for this modern ship. Currently, the team of 18 is in the pre-assembly stage, working out of New England Boatworks to put the wire rigging through the “worm, parcel and serve” process, used in traditional style rigging to waterproof and prevent rusting over time. Once the mast is ready, the team of riggers will step it and rig the lower terminals so that the mast can be held in place while the yards are added and the rigging is completed. The process for this stage of the rigging will take approximately six weeks.

The SSV Oliver Hazard Perry will be energy efficient, powered by the wind whenever possible. To reduce its energy footprint further, its diesel engines and generators will run on biodiesel (supplied by Newport BioDiesel), and ultra-high capability Ensolve separators will cleanse oily waste water down to 2-15 ppm using naturally occurring microbes. On board, the focus will be on sustainable living: conserving water, minimizing trash and reducing food waste. Trash will be separated and all plastics taken ashore for recycling, while black water will be treated in an onboard waste water treatment plant.

“It is expected that with all these ecologically responsible practices in place, along with first-hand experiences of the fragility of ocean life, a sense of pride, stewardship and passion for the marine environment will be instilled in our shipmates,” said Captain Bailey, the Captain of the ship.

Though it is to be certified by the U.S. Coast Guard to carry 49 people on overnight voyages anywhere in the world, SSV Oliver Hazard Perry will spend its first summer close to home. After an annual fundraising gala on July 5 in Newport, R.I., the ship plans to join the Cape Cod Canal Centennial Celebrations July 28-30, and in August, she will travel along the coast of New England, visiting the historically rich ports of Nantucket, Boston, Portsmouth, N.H. and Greenport, N.Y. during her one-week camp sessions for teens. In September, the ship will journey to Baltimore for Bicentennial Celebrations of the Star Spangled Banner and then to Bermuda and Portland during one-week voyages featuring Celestial Navigation and Meteorology Courses in partnership with Ocean Navigator Magazine.