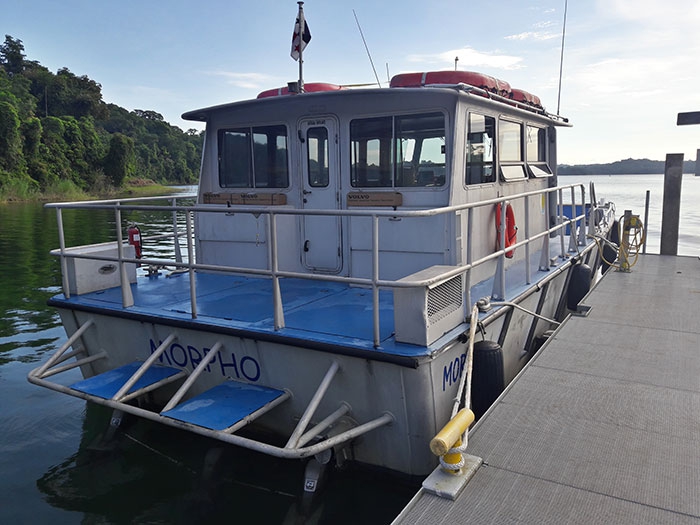 Since repower, launch is faster, more economical — and quieter

Constructed in 2005, the 48 ft Morpho makes daily runs for scientists and visitors between the STRI laboratory facility in Gamboa and the Barro Colorado Island nature sanctuary in the Panama Canal waterway.

Luis Zambrano, STRI maintenance supervisor, spearheaded the project. “The engines were chosen based on the reported reliability, fuel economy, performance and the support we received from CDM,” he explained.

Zambrano said they were pleasantly surprised when they discovered the Volvo Penta D6s were a good deal smaller than the engines they replaced, giving more room around the engine compartment for easier access and maintenance.

Another surprise was the dramatic boost in performance and fuel economy. “During the sea trials, we discovered the boat was cruising at 38 to 39 knots. We could not reach more than 23 knots with the old package. Now operators of the boat are fighting to be the one at the helm due to its performance,” said Zambrano, who also observed that the boat is consuming 50 percent less fuel. Less fuel means lower emissions as well.

“The D6s are much quieter too,” he added.

“We have been receiving good customer support from CDM, who has a reasonable amount of spare parts in stock and trained technicians available,” Zambrano said.

“Special thanks to our outstanding team at CDM, who played a key role in this repowering project and provides ongoing support to the customer,” said Dave Brown, director of marine commercial sales for Volvo Penta of the Americas. “This triple installation validates the unique combination of power, performance, fuel economy and durability offered by Volvo Penta’s diesel sterndrive packages.”

The Smithsonian Tropical Research Institution (STRI) in Panama is a bureau of the Smithsonian Institution dedicated to understanding biological diversity. What began in 1923 as a small field station on Barro Colorado Island has developed into one of the leading research institutions of the world. STRI’s facilities provide a unique opportunity for long-term ecological studies in the tropics, and are used extensively by some 900 visiting scientists from academic and research institutions in the United States and around the world every year. STRI conducts research throughout the tropics in 14 countries in Africa, Asia and the Americas.