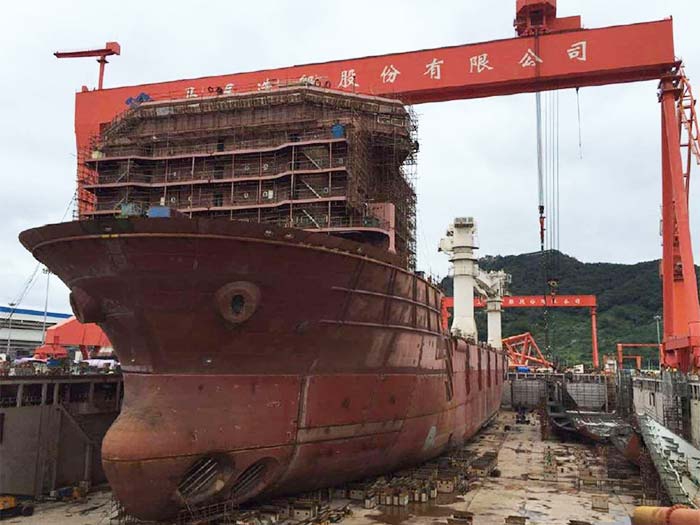 DECEMBER 12, 2017 — A sub sea mining support vessel project has run into a problem. Vancouver, BC, headquartered Nautilus Minerals Inc. (TSX:NUS), which plans to time charter the vessel for five years on its delivery (see earlier story) , says it has been notified by China’s Fujian Mawei Shipbuilding that MAC Goliath Pte Ltd, the buyer of the vessel, has failed to pay the third installment of the contract price (about US$18 million interest).

“Under the shipbuilding contract between the shipyard and MAC,” says Nautilus, “MAC is required to rectify the default immediately, and perform corresponding obligations under the contract.

“If MAC fails to remedy the default within 21 days of the receipt of a notice to MAC from the shipyard, then the shipyard may rescind the contract. In the event that the contract is rescinded, the shipyard has the right to either complete or not complete the PSV and to sell the PSV by private sale either in a complete or incomplete state.

“In accordance with the terms of the contract, Nautilus Minerals Singapore Pte Ltd has the option to either remedy the default on behalf of MAC and/or replace MAC as a party to the contract by way of a novation or assignment within fourteen days of receipt of the notice to the company from the shipyard.”

Nautilus notes that the current build of the vessel is progressing well, with construction over 70% complete. The derrick substructure was recently delivered to the shipyard for installation on the PSV. Foundations for two of the three launch and recovery systems (LARS) are being installed, the bulk cutter winch has been installed, work on the cargo handling system is progressing, and both the 100T and 200T cranes have now also been installed.

Nautilus says it is in discussions with the Shipyard, MAC and third parties with respect to the default and potential remedies, and will issue further updates as matters develop.