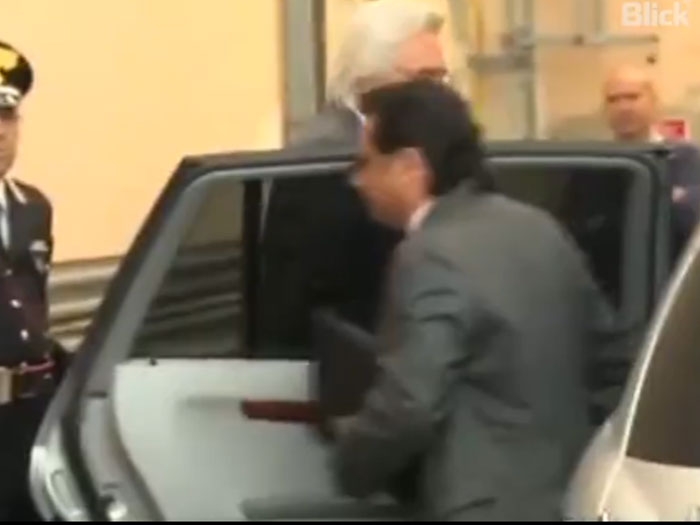 Though Schettino was allowed to testify without being televised, cameras caught him as he arrived late for court

DECEMBER 2, 2014 —A prosecutor in Groseto, Italy,  plans to request over 20 years in prison for ex Costa Concordia captain Francesco Schettino for causing the January 2012 wreck that claimed 32 lives. Italian news agency ANSA quotes judicial sources as saying that Schettino could be sentenced to as many as 22 years in prison if convicted on multiple counts of manslaughter and dereliction of duty.

Italian news media report Schettino claimed in his first court testimony Tuesday that he steered cruise ship close to Giglio Island for “business reasons” and that “The approach to the island favored a commercial promotion.”

Schettino, giving evidence for the first time in his trial, confirmed that he had been entertaining Moldovan dancer Domnica Cemortan to dinner and had invited her up onto the bridge where he took command just 15 minutes before the ship collided with the half-submerged rocks.

“I didn’t do (the sail-past) as a favor for her,” he told the court in Grosseto, Tuscany, but performed the maneuver in order to please the ship’s head waiter, whose family came from Giglio, to impress a retired naval commander, who was staying on the island, and to provide a spectacle for his passengers, while fulfilling what he called commercial demands.

Costa Crociere has said that Schettino made an “unapproved and unauthorized” deviation from the ship’s set route.

Schettino also denied having abandoned the ship, saying that he was thrown into the water.

Schettino’s team claims that no one died because of the actual collision, but that a backup generator failed and water-tight compartments got flooded, creating problems for people wanting to escape.