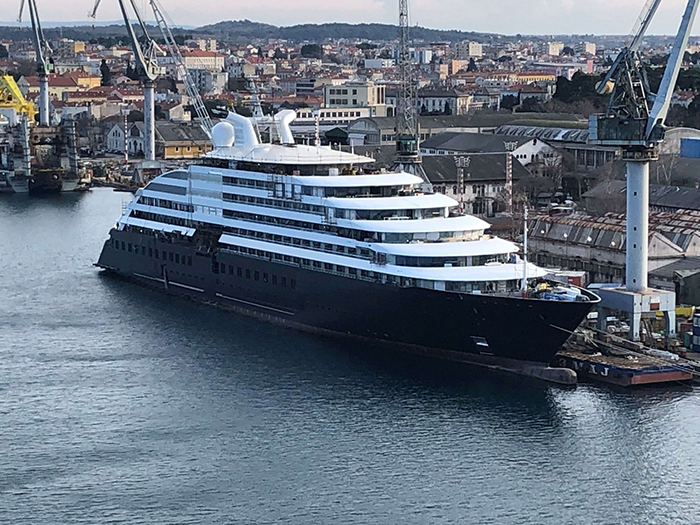 Australian based Scenic Luxury Cruises & Tours reports that the first sailing date for its first oceangoing vessel. the Scenic Eclipse, has again been pushed back, this time to August 15, 2019.

The ship was originally intended to be delivered  in 2018 under an order placed with the troubled Uljanik Group in Croatia under a shipbuilding contract that included an option for a second ship to be delivered in June 2019.

The shipyard’s much publicized financial woes have led to several previous delays.

“We are deeply sorry for the inconvenience these delays to the launch of Scenic Eclipse have caused our guests,” said a Scenic statement on the latest push back. “As a company we have done everything possible to complete the ship within the time limits that were set previously, but a series of events that are outside our control have put us in a position where we must delay.”

The statement notes that “the ongoing financial challenges faced by the Uljanik Shipyard, where Scenic Eclipse is being built, have caused a range of ongoing impacts. Shipyard workers have not been paid full salaries since August 2018, which has led to strikes and manpower shortages as well as several other shipyard disruptions, resulting in months of lost production. To keep the build moving as quickly as possible in these challenging circumstances Scenic has expanded the team within the shipyard by employing cruise ship specialists from Finland, Italy, the U.K. and Norway. The expanded Scenic team took over the lead role in completing the ship with in excess of 115 directly-employed specialists in cooperation with the shipyard’s remaining management team and more than 500 subcontractors.”

The statement adds that “in a very positive development for the Scenic Eclipse build and the Uljanik Group, a consortium comprised of the Croatian DIV group and Italian shipyard Fincantieri was confirmed on February 7 as the new owner of Uljanik. Accordingly, Scenic is confident that these new owners will bring stability and focus to current and future ship builds.”

The Scenic Group has signed a letter of intent with the new consortium that, it says, will lead the shipyard to set up a new Discovery Yacht division within the restructured Uljanik group. This new joint venture will be “fully focused on completing Scenic Eclipse and on expediting the build of the second Scenic Eclipse, as well as progressing development of the next generations of Scenic’s Discovery Yachts.”