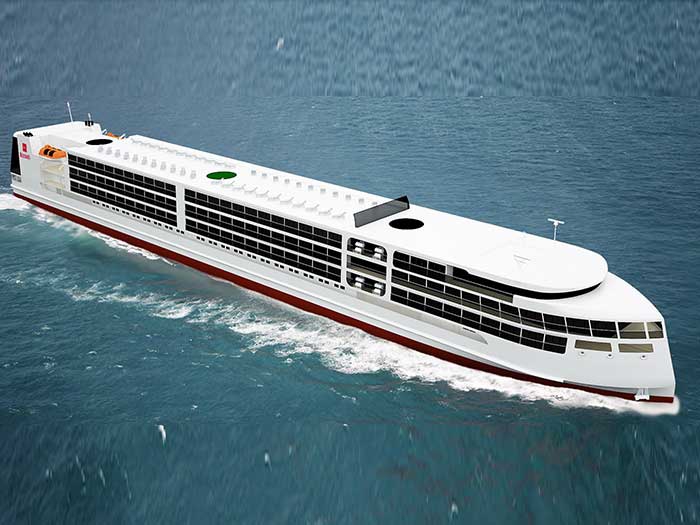 Built to Russian Maritime Register class + M 3,0 (ice 30), the ship can be operated in sea and coastal areas, as well as on the Ladoga and Onega lakes with waves of up to 3 meters high.

Preparations for the construction works are in progress at the shipyard.
Project development will be started soon and the shipyard will embark on the construction this year. Under the contract, the liner is to be completed and delivered to the customer (Goznak-Leasing CJSC) and the consignee (Vodohod) by February 1, 2020.

This will be the second Project PV–300 vesse planned for construction at Russian shipyards in the mid-term period, but the first to be built at Krasnoye Sormovo shipyard.

The new cruise liner is intended to carry passengers along long-distance cruise routes: Moscow – Astrakhan and Moscow – Saint-Petersburg with a passage in the Ladoga and Onega lakes, as well as Moscow – Rostov-on-Don with a passage through the Volga-Don Canal.

Krasnoye Sormovo shipyard has built over 1,750 different ships throughout its history, including 105 passenger ships – steamships, motorships and diesel-electric ships.

“We are proud to be entrusted with the construction of this state-of-the-art ship and we hope to confirm once again the ability of Krasnoye Sormovo shipbuilders to meet any challenges,” says Nikolai Zharkov, Director General of Krasnoye Sormovo. “Shipbuilders of Krasnoye Sormovo have made a considerable contribution into the development of domestic passenger river fleet while building more and more improved and comfortable vessels from year to year. Steamships and motorships built at Krasnoye Sormovo have transported millions of passengers. They have been popular due to their comfort, appearance and reliability and I am sure that the new liners will fully comply with today’s requirements on comfort and reliability of passenger transportation.”